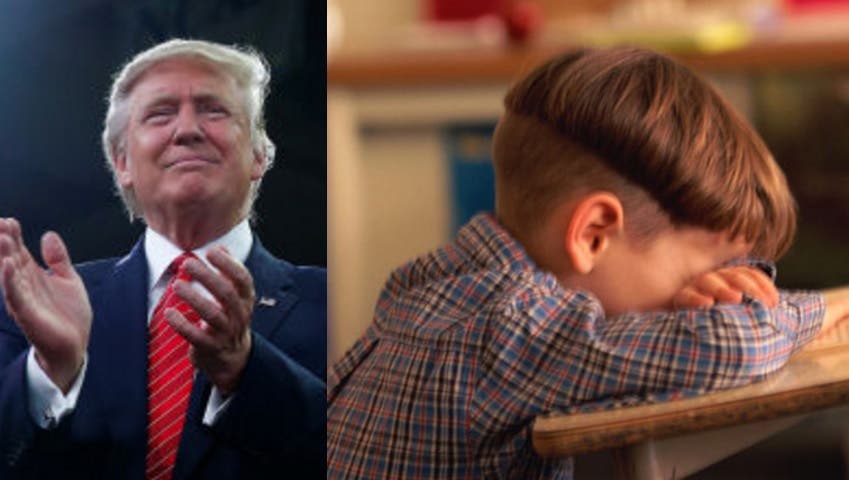 Perpetually impatient President Donald Trump just announced he doesn’t want to wait until next year to begin construction of his “big beautiful wall.”

In order to speed up the process, Trump is planning to take a sledgehammer to public funding – and our kids will feel the most pain.

The Senate’s Labor-HHS-Education subcommittee will take the biggest blow, losing $7.62 billion in grant funding. Funding for programs helping kids take Advanced Placement tests, providing in-school counseling for students in need, and grants for math and science teacher training are all slated for elimination.

Not only is Trump taking aim at American kids, he’s also planning to eliminate the McGovern-Dole International food program, which feeds millions of needy children around the world.

He’s also planning to slam the brakes on Meals On Wheels, slash education budgets, cripple the National Institute of Health, eliminate Americorp, combat climate change and take an ax to dozens of other social and volunteer programs in the U.S. and around the world.

The budget reductions are designed to be an offset to the increased cost of a $30 billion expansion of the military and $3 billion increase in border security (half for his wall on the Mexican border).

Only a month before the government faces a shutdown if legislation to expand the debt limit isn’t passed, Trump wants to use the April 28 deadline as an excuse to start cutting and killing about $18 billion in programs he doesn’t like this year.

Trump has sent Congress a memo detailing additional money he wants to spend and the cuts he wants to make immediately, most of which reflect the severe re-allocations he previously proposed in his “skinny” budget for next year.

For instance, Trump proposes eliminating the Americorps and Senior Corps volunteer programs because it is “not a core function of the federal government to promote volunteerism,” adding, “to the extent these activities have value, they should be supported by private and non-profit sectors.”

The cuts of money already allocated in this year’s budget for the State Department, EPA, HUD, Education, Labor, Agriculture, Health and Human Services and other departments are expected to face serious resistance from lawmakers, especially Democrats.

Trump could be setting himself up for another embarrassing failure to get what he wants from Congress. Democrats in the Senate can block any spending bill, even though they are the minority party.

That means the Republicans will need at least some Democrats to vote with them to give Trump what he is seeking and avoid a shutdown of the government, which would be a fiscal disaster and public relations black eye for the new administration.

Even some Republicans have said that Trump is weighing too late in the process to make such monumental changes, which could also cause the administration problems it probably would like to avoid after the high-profile failure of Trumpcare to pass.

Trump and his cohorts seem to have learned nothing from the outcry that arose when they first proposed ending federal funding for popular programs like Meals On Wheels, crucial medical research, school lunches and more.

There is a cold, cruel, callous feel to both what Trump wants to cut and an undue haste to how he wants to do it. To eliminate so many worthy programs that serve needy, elderly and sick Americans and provide crucial aid around the world in order to raise the already bloated defense budget and build a wall along the southern border many consider unnecessary, just shows how tone deaf this administration is to the need to balance security with humanity.

Trump, who has boasted repeatedly that he is a “winner” may well be setting himself up once again to be a loser. But if he follows through with his heinous plans, it’s our kids who will be the real losers.