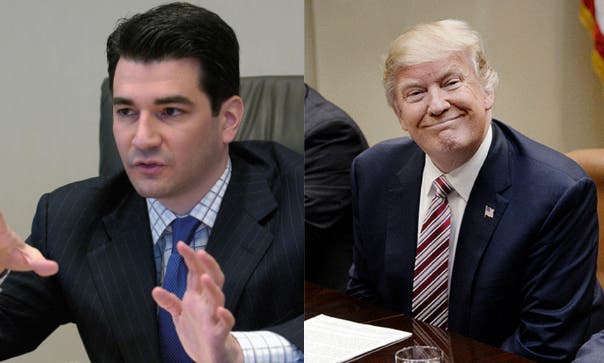 In another case of putting the foxes in charge of the hen house, President Trump’s latest cabinet appointee has disclosed just how much money he’s earned from the industry that he will be tasked with regulating, according to an article published in today’s New York Times.

Dr. Scott Gottlieb, Trump’s choice to lead the Food and Drug Administration, filed his federal disclosure forms ahead of his confirmation hearings, and–surprise, surprise–they reveal that he’s received millions of dollars in payments from pharmaceutical and healthcare companies for consulting and speaking engagements. They also show that he has invested in numerous companies in the health field as part of a venture capital business in which he is a partner.

If Dr. Gottlieb is confirmed by the Senate, he admitted he would have to recuse himself from making any decisions for as many as 20 different medical companies. He would also have to resign from any positions in the healthcare industry to prevent the appearance of conflict of interest.

According to Dr. Susan F. Wood, the former director of the FDA’s Women’s Health office and now an associate professor of health policy at George Washington University:

“If you have a commissioner who is that conflicted, recusal is a tricky business. He’s obviously well trained, he has experience, but my concern is whether he has the strength of will and the commitment to ensuring that actually the best science and the best medicine drives the decisions of the F.D.A.”

This is not the first time that Dr. Gottlieb has faced ethical questions regarding his work for the FDA. During the Bush administration, he was appointed as a deputy at the agency but was forced to recuse himself from the discussions over how to fight off the outbreak of avian flu because of his consulting work for vaccine giants Roche and Sanofi.

He was also criticized for questioning the decisions made by FDA scientists regarding drug approvals. According to Dr. Wood:

“The agency was being highly politicized by the Bush administration, and he certainly was part and parcel of that politicization. I think for that subset of F.D.A. career staff, the physicians who worked there, I think there was suspicion of everyone in leadership at the time.”

After his brief stint at Bush’s FDA, Dr. Gottlieb returned to the much more lucrative private sector until President Trump’s recent appointment to head up the agency.

It will now be up to the Senate to decide whether a healthcare industry insider can be trusted to properly regulate his former friends and colleagues or if the conflicts of interest are too overwhelming to consider. Given the anti-regulatory fervor of Trump and his Republican Congress, don’t expect the interests of the average American to factor much in the decision.