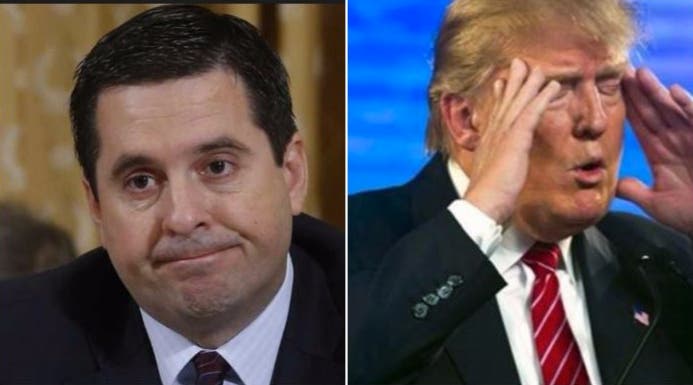 The New York Times has just revealed the names of the two White House officials who provided the intelligence reports to Representative David Nunes (R-CA), the Chairman of the House Intelligence Committee, that could implicate President Trump and his close associates in contacts with Russian government agents.

To date, Rep. Nunes has refused to identify the sources or contents of the information he reviewed and shared with the President, citing the need to keep sources confidential so others would feel comfortable bringing the committee sensitive information.

According to The NY Times, however:

Several current American officials identified the White House officials as Ezra Cohen-Watnick, the senior director for intelligence at the National Security Council, and Michael Ellis, a lawyer who works on national security issues at the White House Counsel’s Office and formerly worked on the staff of the House Intelligence Committee.

Cohen-Watnick is a former Defense Intelligence Agency official hired by the now-disgraced Lt. General Michael Flynn, Trump’s first National Security Advisor who resigned for lying to Vice-President Pence about the nature of his secret conversations with the Russian Ambassador, Sergey Kislyak.

Ellis is one of Nunes’ former staffers, which in itself raises yet another set of concerns.

According to the Times‘s sources, Cohen-Watnik took on the task of reviewing the highly classified intelligence documents containing the communications intercepts of foreign agents after President Trump’s Twitter blast accusing the Obama administration of wiretapping him during the campaign.

The anonymous officials who gave the names to The Times told them that the documents that Rep. Nunes reviewed were reports of ambassadors and other foreign officials discussing their contacts with President Trump’s family and his closest associates prior to the inauguration. Whether the President himself or any of his staff were recorded as part of the surveillance is still unknown at this point.

Nunes read the documents during a clandestine meeting at the White House last week and later went on to brief the President, the subject of the investigation, on their contents while controversially failing to inform any of his fellow Intelligence Committee members, both Republicans and Democrats alike.

The President later used that briefing to support his ridiculous and widely debunked claims that he was “wiretapped” by former President Obama, although what the documents reportedly show is that at most Trump’s staff, family members, and perhaps the President himself were incidentally caught communicating with foreign agents under surveillance by US intelligence agencies.

The true significance of the revelation of Rep. Nunes’ sources is that while the Intelligence Committee was tasked with investigating the charges of Russian interference in the U.S. elections, the President has been trying to steer the conversation away from his campaign’s potential collusion with Russia and towards his outrageous Breitbart-inspired claims that President Obama was “wiretapping” him.

Now, The NY Times has confirmed that it was internal White House sources tasked with supporting Trump’s surveillance story who contacted Nunes and gave him access to the intelligence documents in order to move the narrative away from the charges of the Trump campaign’s coordination with Russia.

With the House Intelligence Committee hearings stalled and caught up in accusations that Rep. Nunes is too partisan to conduct an impartial investigation, the Senate Intelligence Committee has vowed to conduct their own “aggressive” investigation into both Russian electoral interference and the Trump campaign’s ties to Russia, doing everything they can to distance themselves from the mess that the House committee has become.

It’s clear now that the House Intelligence Committee has been compromised and Devin Nunes cannot be trusted to fulfill his constitutional duty to provide oversight of the executive branch. It falls to the Senate to do their jobs and get to the bottom of this mess – and to make sure that justice is served against the perpetrators of treason.