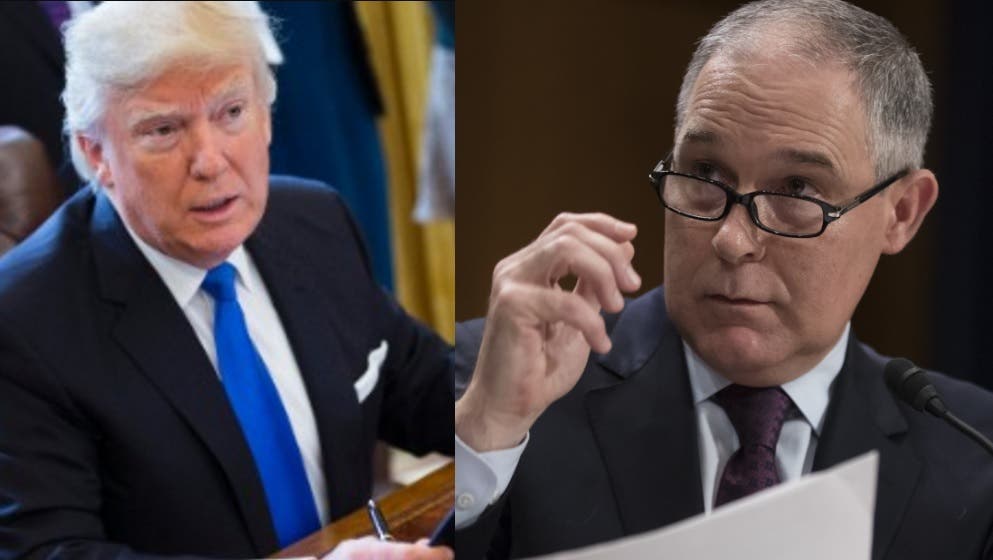 Trump Vowed To Eliminate The Debt. The CBO Responds…

It is not unusual for President Trump or those around him to be accused of lying, but now one of his most controversial appointees faces consequences in his home state for doing exactly that.

The Oklahoma Bar Association has opened an investigation into whether Scott Pruitt, an attorney and the current head of the Environmental Protection Association, should be disbarred for lying about his use of a personal email account while he was the Attorney General of Oklahoma.

Of course, the irony is that Trump repeatedly denounced Hillary Clinton during the 2016 Presidential campaign for using her personal email while she was U.S. Secretary of State, and now a member of his cabinet is not only accused of doing something similar but then lying about it before Congress.

Clinton was never accused of lying to Congress and was cleared by the FBI.

It is the lie that the bar association will investigate. In a letter confirming it was opening an investigation, the General Counsel of the Oklahoma Bar Association said the issues that it will look at are whether Pruitt violated ethical and professional conduct, which is expected of an attorney.

The complaint cites Pruitt’s testimony on January 18, 2017, at his confirmation hearing in Washington before the U.S. Senate Committee on Environment and Public Works. , which was considering Mr. Pruitt’s appointment to administer the EPA, Mr. Pruitt stated three times that he only used his official Oklahoma Attorney General email address to conduct official business

“Pruitt stated three times that he only used his official Oklahoma Attorney General email address to conduct official business,” the complaint filing states. “However, an examination of documents the Oklahoma Attorney General’s Office released in response to a state public records act lawsuit, there are several instances where Mr. Pruitt used a personal email address to conduct official business.”

The complaint goes on to cite multiple instances where it has been proven Pruitt corresponded about state business with outside individuals using his personal email account and not his state email account.

The complaint against Pruitt was filed by Oklahoma attorney and Oklahoma University associate professor Kristen van de Biezenbos and the Center for Biological Diversity, which is based in Portland, Oregon.

Pruitt has come under harsh criticism from many environmental groups for his views, including his denial that humans cause climate change, and his policies, which include cutting and ending numerous programs to protect the environment. he has also worked with Trump on a proposed budget that would severely cut the agencies funding, and thus much of the work it has done in the past.

Kristen van de Biezenbos is described in her Oklahoma University bio as a teacher of energy law and policy, who in the past practiced law in New Orleans and elsewhere dealing in energy issues, including oil and gas, and in international commercial law.

Pruitt in Oklahoma was criticized by many environmentalists for being a close ally of the oil and gas companies and helping push through laws and eliminate regulations that made fracking easier.

Phil Cross, a reporter for KOKH Fox 25 in Oklahoma was one of the first to report on Pruitt’s use of personal email and on the state bar investigation. He analyzed whether Pruitt had broken any laws and wrote: “It is not illegal to use a private email account for state business, as long as those records are included in searches for public documents. However, the revelation is in direct conflict with Pruitt’s written and oral testimony before the Senate Environment and Public Works (EPW) Committee during the confirmation process.”

After the state bar investigates, gets input from Pruitt and hears other witnesses, its findings will go to its Professional Responsibility Commission for a judgment.

If Pruitt is found to have violated the state bar rules on ethics nad professional responsibility, he can appeal to the state Supreme Court, where his former assistant now sits as a judge.

While there seems to have been no consequences for Pruitt after he lied to the Senate Committee, this could lead to his being disbarred. That does not mean he would lose his EPA job, but it would be another black eye for him and the troubled Trump administration.