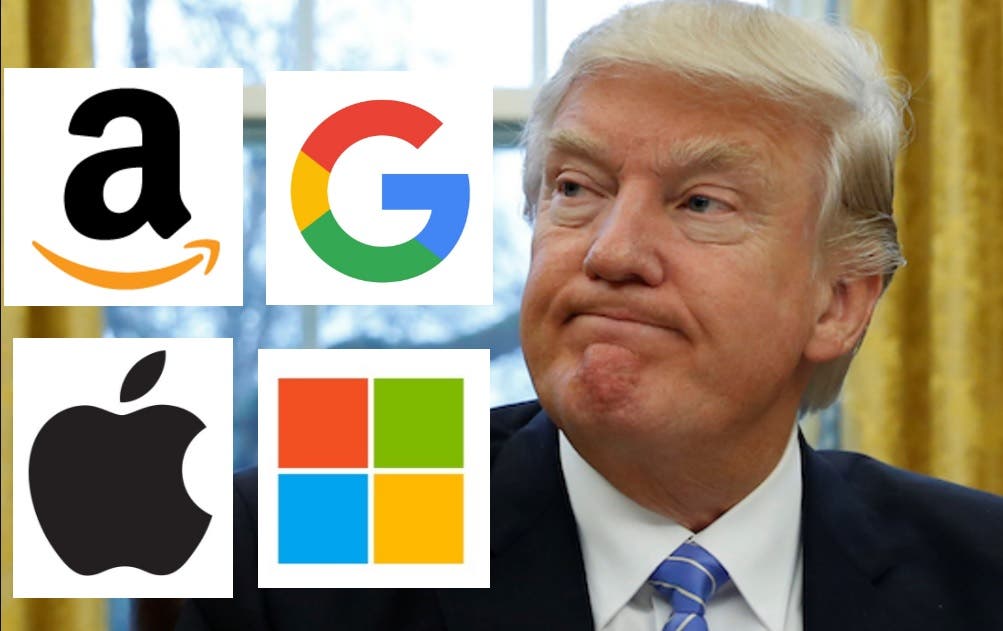 As far as many of America’s biggest, most progressive companies are concerned, President Trump’s climate change denial is like getting a lump of coal in their Christmas stocking.

Trump signed an executive order earlier this week fulfilling his campaign pledge to roll back many of President Obama’s regulations on climate change, declaring that it was being done to help “businesses and create jobs.”

However, many of America’s biggest companies, led by tech industry giants like Amazon, Apple, Google, and Microsoft, don’t agree and have pledged to continue down the path laid out by President Obama in developing alternative energy sources and do all they can to counter the effects of global climate change.

They are among 81 major companies that worked with the Obama administration as part of an effort they say will cut energy costs, provide a more secure source of energy, make the energy market more diverse, head off activists pressure and take a proactive approach that will help their bottom line far into the future.

In a joint statement, the companies declared: “We believe that strong clean energy and climate policies, like the Clean Power Plan, can make renewable energy supplies more robust and address the serious threat of climate change while also supporting American competitiveness, innovation, and job growth.”

The list of companies pledged to continue Obama-era efforts to counter climate change goes far beyond Silicon Valley to include some of the biggest U.S. corporations including General Electric, Mars, and Walmart, the largest American retailer.

“This work is embedded in our business,” Wal-Mart spokesman Kevin Gardner told Bloomberg News in an email. It’s “good for the business, our shareholders and customers; if ultimately we are able to positively impact the environment in the process, that’s a win too.”

Walmart has committed to getting half its power from renewable energy sources by 2025 at the latest.

Other companies, while avoiding a direct attack on Trump, have said they will continue to work on lowering emissions and finding alternative energy sources. Those include Proctor & Gamble, Best Buy, Ikea, Nestle and Levi Stauss.

Damon Jones, a spokesman for Proctor & Gamble, said: “We will continue to integrate sustainability into our business practices, operations, innovation, brand building, and culture.”

Amazon, Apple, Google, and Microsoft continue taking a leadership role in the battle against the negative effects of climate change. Last June, they joined together as the Tech Amici to file a brief with the U.S. Appeals Court in a case brought by the state of West Virgina against Obama’s Clean Power Plan, which Trump said cost many coal workers their jobs when he signed the rollback.

In the long term, most of the work signed the Paris Agreement because the future will be in alternative energy that is renewable, clean and sustainable.

“This commitment,” said Amazon, Apple, Google and Microsoft in their legal brief, “reflects Tech Amici’s belief that delaying action on climate change will be costly in economic and human terms, while accelerating the transition to a low-carbon economy will produce multiple benefits with regard to sustainable economic growth, public health, resilience to natural disasters, and the health of the global environment.”

“It also reflects,” the brief continued, “their firsthand experience that developing and using renewable electricity generation is affordable, reliable, and consistent with sound business practices.”

Some companies and industries including coal and petroleum have praised Trump, but the smart money is still on renewable energy and a commitment to counter the negative effects of climate change.

Trump’s obsession with revitalizing a dying coal industry ignores the reality of a marketplace where coal is losing out not because of regulation, but because natural gas is a less expensive alternative and alternative energy sources like the sun and the wind aren’t as dirty as carbon energy.

What Trump is doing to ignore scientific facts and deny mounting evidence regarding the cause of looming climate catastrophes may slow down the environmental efforts, damage to the environment and undo America’s position of leadership in a crucial global effort – but ultimately it just paints the Republicans as the party of Luddites.

Whatever the short-term political gains, Trump’s short-sighted anti-climate crusade is a loser’s bet – and the rest of corporate America won’t let our nation get left behind.