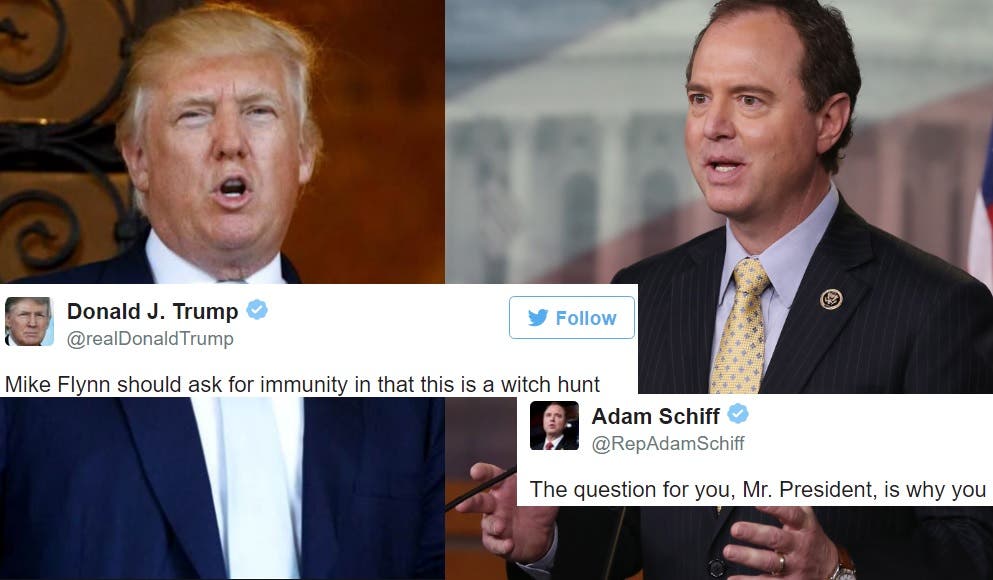 The sordid tale of Trump and his team’s potentially treasonous communications with agents of the Russian Federation continue continues to unfold in dramatic fashion.

After disgraced National Security Advisor Michael Flynn announced he was ready to testify in front of Congress in exchange for immunity, Trump took to Twitter to try to defend him in a bizarre message that tried to divert attention away from his administration.

Mike Flynn should ask for immunity in that this is a witch hunt (excuse for big election loss), by media & Dems, of historic proportion!

The ranking Democrat on the House Intelligence Committee, Rep. Adam Schiff (D-CA), fired back at Trump with a warning that should shake Trump to the bone.

The public should learn a lot more about WHY General Flynn wants immunity when Sally Yates testifies before the House Intelligence Committee https://t.co/F6mjRbjUby

The question for you, Mr. President, is why you waited so long to act after you learned Flynn (through your VP) had misled the country?

That is a very good question.

Why did President Trump and Vice-President Pence wait nearly three weeks to fire Flynn after discovering that Flynn had lied to them, the FBI, and the public about discussing President Obama’s sanction against Russia in his secret communications with Russian ambassador Sergei Kislyak?

Why did they leave him in his role as National Security Advisor, with access to our nation’s most classified information, for three weeks after Acting Attorney General Sally Yates and the Justice Department warned the them that Flynn was vulnerable to blackmail by the Russians because of those lies?

Why did Mike Pence, head of Trump’s transition team, appoint him to the job at all after being warned in November that Flynn had received half a million dollars from the Turkish government to act as a foreign agent on their behalf? Why did Pence lie to the American people about what he knew?

Why did Trump and Rep. Devin Nunes concoct a laughably clumsy charade about surveillance of the Trump team to try to distract the American people from the investigation into Trump’s Russia ties and to give credence to his outrageous wiretap accusations against President Obama?

We will no doubt learn all the answers to all these questions in the coming weeks, as well as the most important question on everyone’s minds: who will replace Trump and Pence after they are sent to prison in disgrace?