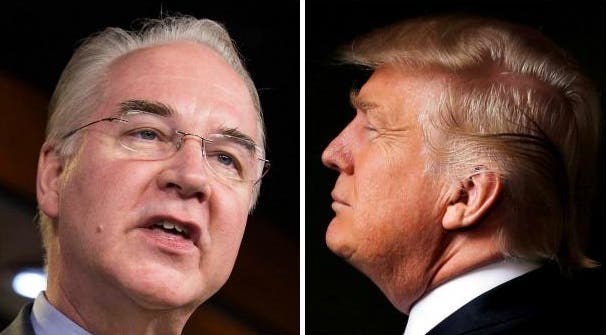 Tom Price, the Trump administration’s Secretary of Health and Human Services, has been caught with his hand in the cookie jar.

Price, who was a Republican Georgia Congressman before he was brought into the Trump cabinet, reportedly bought $90,000 worth of pharmaceutical stocks on the very same day that he intervened with the Centers for Medicare and Medicaid Services to try to block a proposed rule that could have hurt the drug companies share prices, according to a new report from Pro Publica.

Secretary Price was a doctor before serving in Congress, and his trading of hundreds of thousands of dollars worth of health care stocks became a subject of scrutiny during his cabinet confirmation hearings.

While Price has claimed that the stock trades were made by his broker without his knowledge, Pro Publica has reported that Price’s finances had been under investigation by former U.S. Attorney Preet Bharara before he was unexpectedly fired by President Trump earlier this month.

According to Pro Publica:

On March 17, 2016, Price’s broker purchased shares worth between $1,000 and $15,000 each in Eli Lilly, Amgen, Bristol-Meyers Squibb, McKesson, Pfizer and Biogen. Previous reports have noted that, a month later, Price was among lawmakers from both parties who signed onto a bill that would have blocked a rule proposed by the Obama administration, which was intended to remove the incentive for doctors to prescribe expensive drugs that don’t necessarily improve patient outcomes.

What hasn’t been previously known is Price’s personal appeal to the Centers for Medicare & Medicaid Services about the rule, called the Medicare Part B Drug Payment Model.

“contacting an executive branch agency” represents “a degree of advocacy above and beyond that involved in voting” on legislation where a financial conflict of interest may exist.

“Such actions may implicate the rules and standards … that prohibit the use of one‘s official position for personal gain,” the guidelines state. “Whenever a Member is considering taking any such action on a matter that may affect his or her personal financial interests, the Member should first contact the Standards Committee for guidance.”

The lead lawyer for the House Ethics Committee refused to comment on whether then-Congressman Price sought or received any such guidance, citing the confidentiality of any of their discussions with members of Congress.

Whether the stock transactions were simply an awkward coincidence or a calculated ploy at self-enrichment, the fact that the head of the Health and Human Services Department has such major issues regarding conflicts of interest is a bitter pill to swallow.