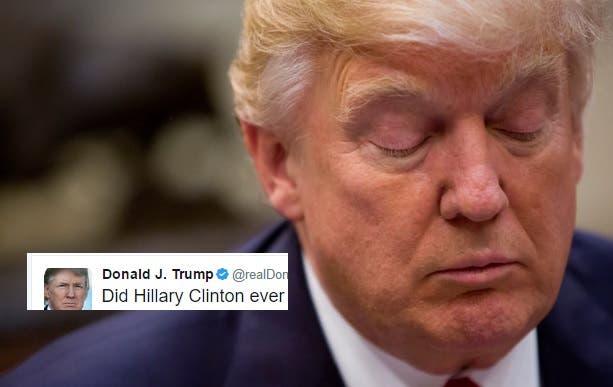 Donald Trump is feeling especially desperate these days, barely two months into his disastrous presidency. That much has been made clear by the frequency and the subjects of his early-morning Twitter rants, as Trump turns to rehashing campaign trail battles to somehow distract the public from the ongoing investigations into the collusion between his team and agents of the Russian Federation.

This morning, Trump quadrupled-down on his outrageous allegations that President Obama had illegally wiretapped the Trump Team during the election. Those accusations have been debunked by the Director of the FBI, but Trump still refuses to back down.

While he was at it, he complained about Hillary Clinton and John Podesta, as if to somehow link them to the Obama wiretap lies and spin the issue into some kind of larger Democratic “deep state” conspiracy.

Such amazing reporting on unmasking and the crooked scheme against us by @foxandfriends. "Spied on before nomination." The real story.

Was the brother of John Podesta paid big money to get the sanctions on Russia lifted? Did Hillary know?

Did Hillary Clinton ever apologize for receiving the answers to the debate? Just asking!

.@FoxNews from multiple sources: "There was electronic surveillance of Trump, and people close to Trump. This is unprecedented." @FBI

His tweets about former Democratic nominee Hillary Clinton and her former campaign manager John Podesta are an obvious and pitiful attempt to play the victim, to try to convince his supporters that poor Trump has been “conspired” against since the beginning.

Hillary Clinton might as well be the boogeyman to Trump’s gullible fans, and his insistence on rehashing the “Clinton got the debate questions first!” issue reveals that even though he won, that event still rankles him; the depths of his pettiness and inability to ignore the most pedestrian of slights is most unbecoming of a President.

FOX News appears to be a willing partner in perpetuating this ridiculous charade, as a story was published Friday alleging that the “sources” who discovered Trump team members were named in intelligence reports was “very well known, very high up, very senior in the intelligence world.”

It is unclear if either Ezra Cohen-Watnick and Michael Ellis, the two Trump White House officials named by the New York Times as having provided the surveillance information to Rep. Devin Nunes (R-CA), are the anonymous “sources” cited by FOX.

“We heard germs of it, that it was beginning to take root during Friday’s show. But right after Friday’s show, we were able to get a perspective on basically what President Trump thought a month ago when he went out and tweeted on Saturday morning. Man, I guess on some level he saw some things that only somebody surveilling his administration would know” pandered Steve Doocy on this morning’s FOX & Friends.

All of that is ridiculous, seeing as Trump got the idea from a Breitbart “news” article and had no idea that his campaign staffers were being recorded in their secret communications with the targets of FISA warrants.

Trump can try all he wants to deflect attention away from the rapidly unfolding scandal, but the FBI and the Senate Intelligence Committee aren’t going to suddenly halt their efforts just because Trump and FOX News think they’ve found a clever way to spin the fact that Trump’s team was communicating with foreign agents during the election – which is more proof of guilt than anything else.