Webster’s Dictionary Just Trolled The Life Out Of Ivanka Trump

What’s being called the worst chemical attack in recent memory was carried out today in the Syrian town of Khan Sheikhoun.  Video footage of the moments following the attack circulating on social media has been absolutely horrifying and heartbreaking – even in the context of a civil war that’s produced tragedy on an unimaginable scale for 6 years running.

According to the New York Times:

A senior State Department official said the attack appeared to be a war crime and called on Russia and Iran to restrain the government of President Bashar al-Assad of Syria from carrying out further chemical strikes.

Naturally, leaders around the world are sending prayers and words of encouragement to the people of Syria, and they’re looking to hold Assad and his enablers accountable for this crime against humanity.

At least most of them are.  The White House released a statement today from President Donald Trump in the wake of the attacks, and it sums up his heartless, hypocritical, self-serving presidency in one gloriously empty paragraph devoid of any substance, command of the office, or resonance.

In it, he offers no reassuring words to the Syrian people, nor does he extend the condolences or the prayers of the American people to them, as past Presidents often have.

He also, most tellingly, fails to direct any condemnation at leaders of Iran or Russia, or at the Syrian dictator himself.  He was only willing to go so far as blaming the “Assad regime” more broadly.  That phrasing could signal a willingness to accept an Assad play to deny the attack now, only to blame it on a rogue general acting alone later, should conclusive evidence emerge proving the State’s guilt.

Trump did find someone to single-out for this atrocity, however:  President Obama.

“Today’s chemical attack in Syria against innocent people, including women and children, is reprehensible and cannot be ignored by the civilized world. These heinous actions by the Bashar al-Assad regime are a consequence of the past administration’s weakness and irresolution. President Obama said in 2012 that he would establish a “red line” against the use of chemical weapons and then did nothing. The United States stands with our allies across the globe to condemn this intolerable attack.”

The degree of tone-deafness and political opportunism revealed in just 4 sentences lay bare a man of astonishingly insipid character and bereft of any morality what-so-ever.

The cheap, out-of-context attack on President Obama is particularly despicable, an revealing.  It’s one kind of contemptibility to suggest that the guy before you “did nothing” and is therefore somehow culpable for the inhumanity in Syria.  It’s quite another to do so when you yourself DEMANDED HE “DO NOTHING!” 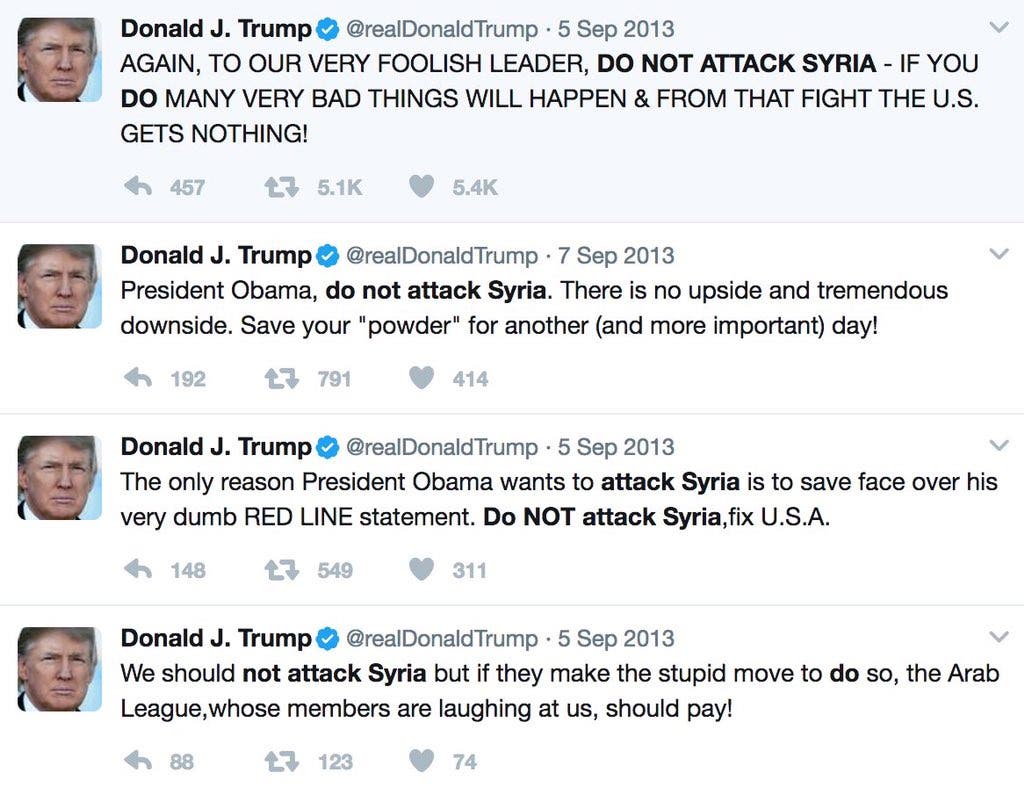 Just like everything else the commander in chief says, this official response to an act of such profound brutality was completely detached from reality, untethered to the facts of his own record, and, once easily stripped of any pretense of empathy, revealed to be nothing more than a vain exercise in self-indulgence.