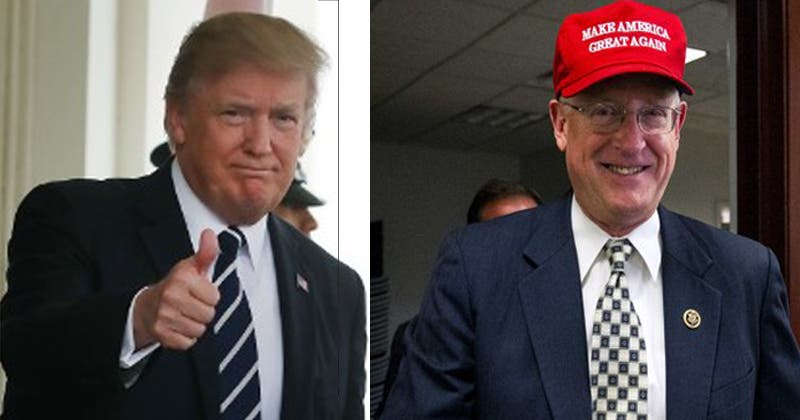 Since a bizarre press conference in which Congressman Devin Nunes (R-CA) broke protocol to aid the Trump regime in his committee’s investigation into Russian meddling in the 2016 election, fans of justice have been crying foul. So, when Nunes announced this morning that he had finally recused himself from the investigation, it was celebrated by every objective observer.

The jubilation, however, will be short lived. Taking Nunes’ place as head of the House Intelligence Committee’s investigation into President Donald Trump’s alleged collusion with Russia will be Congressman Mike Conaway (R-TX) — hardly an impartial advocate for justice.

Conaway, who endorsed Trump in May of last year, made waves when he dismissed concerns about Russian hackers’ illicit influence on our elections by comparing them to a mariachi band. He told the Dallas Morning News in January:

“Harry Reid and the Democrats brought in Mexican soap opera stars, singers and entertainers who had immense influence in those communities into Las Vegas, to entertain, get out the vote and so forth. Those are foreign actors, foreign people, influencing the vote in Nevada. You don’t hear the Democrats screaming and saying one word about that.”

Conaway was referring to “El Corrido de Hillary Clinton” a mariachi song written and recorded by Vicente Fernández, a 77 year-old Mexican singer. Fernández traveled to Las Vegas in the Fall and performed the song at a “fiesta” following the final presidential debate with the California band, Los Tigres del Norte, and Angélica María, a Mexican actress who was born in the U.S.

When asked to clarify if he really believed the mariachi song was on par with cyber-hacking sponsored by a foreign adversary, Conaway replied, “Sure it is, it’s foreign influence. If we’re worried about foreign influence, let’s have the whole story.”

As to the influence of Fernandez and his so-called accomplices, Conaway added, “Those folks are monster in the Hispanic community.” To recap. “those folks,” are a 77 year-old Mexican, a U.S. citizen who lives in Mexico, and a band from California.

If you are holding out hope that Conaway may be a statesman who will rise to the challenge of defending justice over his own partisan ambitions, think again. In this video of last month’s testimony from FBI Director James Comey, Conaway tries to divert the hearing by baiting the witness into a nonsensical line of questioning that left onlookers baffled:

While Nunes’ recusal remains welcome news, fair-minded Americans should be under no illusion that the investigation is on firmer ground. The Intelligence Committee has traded one partisan hack for another, and you can bet that Donald Trump and Vladimir Putin are thrilled with the development.

We are still along way from the end, however. Regardless of who leads this investigation, the mounting evidence is fast becoming too much for the people to ignore. Fellow Texan and Intelligence Committee Member Joaquin Castro (D-TX) predicted jail time for multiple members of the Trump team, and he scoffed at Conaway’s mariachi band assessment.

“The intelligence community has indicated that Vladimir Putin essentially ordered cyberwarfare, and nothing else compares to that,” Rep. Castro said.

This definitely falls into the category of two steps forward, one step back. But with leaders of integrity like Castro on the inside and an active citizenry that demands accountability, justice remains just over the horizon.

Nobody said that resisting a corrupt presidency would be easy.