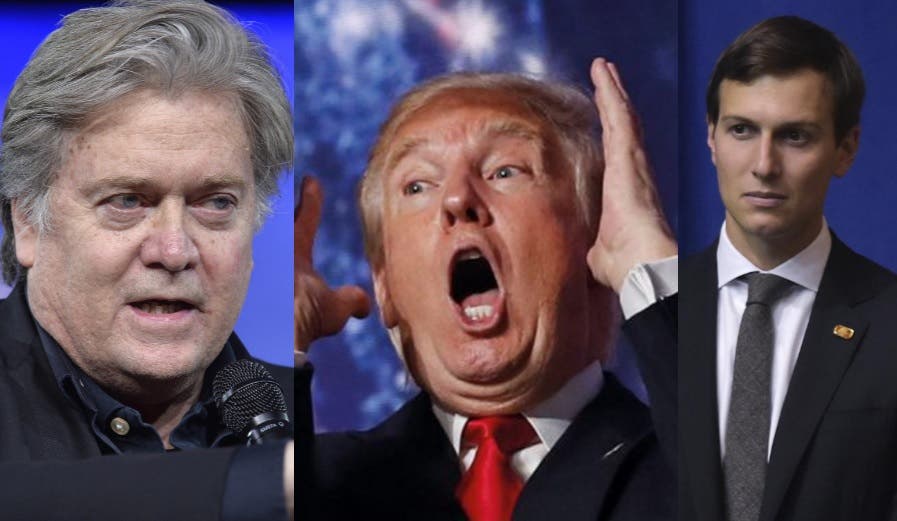 The petulant squabbling in the Trump White House has just been dragged out in the open for all to see. The Daily Beast’s Asawin Suebsaeng has just revealed that Chief Strategist and avowed white supremacist Stephen Bannon called Trump’s son-in-law Jared Kushner a “cuck” and a “globalist.”

Aides report that fighting between Bannon and Kushner is “nonstop” as Bannon complains that Kushner is trying to “shiv him and push him out the door.”

One official said that “there’s a big fight [going on]. It’s all about policy. There’s tension [between them] on trade, health care, immigration, taxes, [terrorism]—you name it.”

It turns out that Kushner, who was a Democrat before his wife’s father ran for the White House, has been a major barrier to Bannon’s efforts to control President Trump’s agenda. Kushner’s opposition was a deciding factor in the decision to remove Bannon from the National Security Council.

That decision probably prompted Bannon to deride the President’s beloved son-in-law, who is one of Trump’s most important advisors, as a “cuck” and a “globalist.”

“Globalist” is a barely disguised anti-Semitic slur, because white supremacists like Bannon believe in conspiracy theories of a global Zionist cabal pushing their sinister agenda of tolerance and diversity (“cultural marxism,” as they put it) on white Christian culture.

It’s no surprise that Kushner, who himself is Jewish, is clashing so frequently with Bannon, a deviant radical ideologue with an apocalyptic worldview. But Bannon’s comments represent a huge conflict for the overwhelmed Trump, who relies heavily on both Bannon and Kushner for advice.