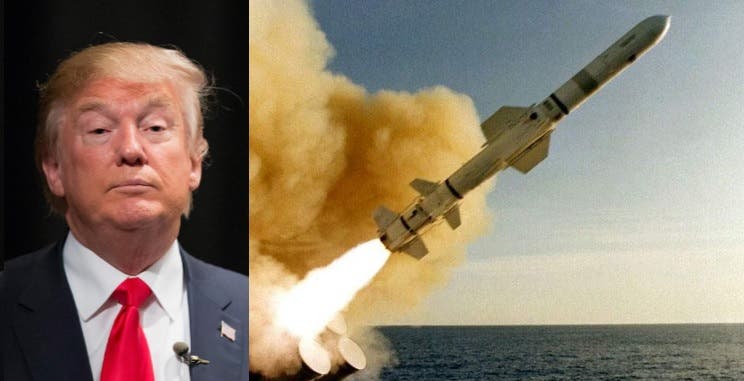 Barely two months into his presidency, Donald Trump has brought us to war.

US naval vessels have just launched fifty Tomahawk missiles against the al-Shayrat airfield in Homs and other military targets in retribution for dictator Bashar al-Assad’s March 4th sarin gas airstrike against civilians in Khan Sheikhoun, Idlib province, that killed 86 and wounded hundreds more.

The strikes are designed to cripple Assad’s air forces, which have been brutal in their systematic targeting of civilian sites like markets, schools, and hospitals.

President Trump used the strike plan laid out by the Obama administration in 2013, when Assad’s chemical attacks in East Ghouta nearly brought America to war in Syria.

Two US military officials spoke to the Intercept earlier this afternoon describing what the strike plan was, and warned that the strikes could bring us into conflict with Russia:

According to both U.S. military officials, the current proposal would likely result in Russian military deaths and mark a drastic escalation of U.S. force in Syria.

In addition, Assad has purposefully placed his military installations in heavily populated areas, meaning civilian casualties are likely to be high.

In just one week, the Trump administration has gone from declaring that Assad will stay in power to mobilizing a coalition to remove him.

Trump’s impulsive decision, coming at the same moment that he was at dinner with the Chinese Premier Xi Jinping, is no doubt a flexing of the muscles designed to impress his rival.

But the speed of the decision is extremely disturbing, as it is highly doubtful that President Trump has any plan to deal with the consequences and hints to Trump adopting a shoot-first, deal with it later approach to military matters.

Moscow and Tehran will be furious at the strikes, being close allies of Assad and having spent millions of dollars and thousands of lives propping up his regime over the past few years. Syrian al-Qaeda affiliate Jabhat Fatah al-Sham and other jihadist groups will be celebrating as Assad’s air power is crushed. Trump has uncorked a deadly can of worms, and the situation has the potential to devolve into the Iraq War all over again.