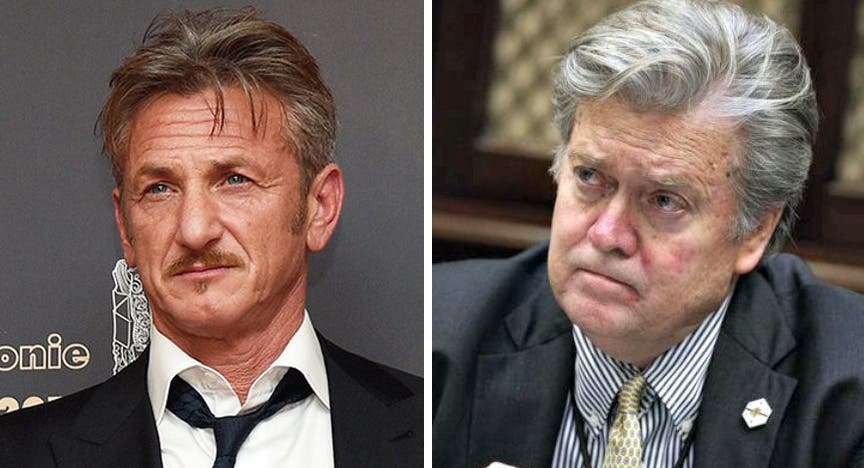 Guess Who Made A Killing Off Of US Attack On Syria?

A rumor has been floating around for a while that actor-producer-activist Sean Penn once worked with Steve Bannon, President Trump’s controversial Chief Strategist.  Turns out the rumor is true, and Penn just spoke publicly about their collaboration for the first time.

The outspoken activist and movie star made his directorial debut in 1991 on the crime drama, The Indian Runner, which he also wrote.  To raise the $7 million he needed to make the movie, Penn did what lots of artists do: he shopped his project to the vast network of “money men” eager to invest in the movie business.

One of those money men he met with was Stephen K. Bannon, who had just come to Hollywood with his check book wide open after years working for Goldman Sachs on Wall Street.

The Indian Runner ended up being Bannon’s first movie in what turned out to be a rather short and undistinguished career as a Hollywood producer.  Penn shared his memories of Bannon recently with Death and Taxes magazine:

“Bannon was then, as he is now, simply another bitter Hollywood wannabe who went rogue by way of toxic narcissistic iconoclasm.  But, deep in his heart, he’s just a conniving hateful bloated punk who despises mankind.  And then there are also the bad things about him…”

Penn’s movie starred acclaimed actor Viggo Mortensen, and included a supporting performance by the legendary Charles Bronson, and it did pretty well.  The Indian Runner earned a 74 percent ‘fresh rating’ on Rotten Tomatoes – which means critics and film geeks liked it – and it grossed a healthy $191 million.