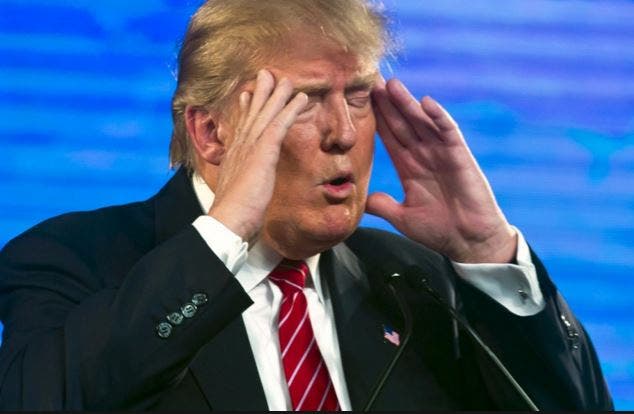 The Mugshot of Alabama’s Republican Governor Just Came Out

If there’s one thing this President respects, it’s polls.  At least when they’re skewing in his favor.  When they’re not, they’re “fake news.”

Which probably explains why you’re not hearing much out of the White House today over Gallup’s daily tracking poll.  President Trump has been mired in record-low territory since before he took office.  Investigations into his ties to Russia, staff resignations and reassignments, and a highly public legislative defeat over Obamacare, have weighed him down ever since.

Today’s Gallup poll shows no sign of improvement.   He remains at or under 40% approval rating once again, slightly up from his record low of 35% a couple weeks ago. Normally, this wouldn’t be news.  Everyone who watches these polls, however, expected some kind of a bounce after the President ordered a missile strike on Syria’s Shayrat air base last Thursday.

Even without all of the self-inflicted wounds, poll numbers for new administrations are notoriously fickle.  The losing party is stung and bitter after elections that are divided and partisan, even in the best of cases.  The winning party divides back again into its natural factions after uniting behind a candidate for the general election.  It can take time for these factors to dissipate, and for that to be reflected in the polls.

But there’s always been one sure-fire way for a president to unite his supporters and earn a bounce in the polls in the process: initiate military action.  As sure as the sun rises in the east, the party that controls the White House will succumb to a combination of patriotism and political survival and line-up behind the President when he orders our military to strike an adversary.  And if the strikes are deemed necessary and/or portend a larger commitment from our military, he can expect them to solidify and improve among his opposition as well.

We saw that start to happen on Friday, the day after the strike.  Republicans in congress  trumpeted the attack, despite contradictory sentiments when President Obama faced a similar situation.  A tweet by First Daughter Ivanka Trump expressing how ‘proud’ she was of her father went viral.  Right wing media darling Just Janine Pirlo did her part as well, using her weekend show on Fox News to demand Republicans get behind the president.

Unfortunately, however, none of that seems to have nudged the polls in his favor.  Gallup’s numbers released today shows zero Syria bounce.  Gallup also released a poll reflecting the public’s approval of the Syria attack itself, and it comes in quite low historically speaking:

Americans’ support for the military strikes against Syria last week is historically low compared with reactions to previous U.S. military actions. Fifty percent of Americans approve of the missile airstrikes, while 41% disapprove. Ten percent have no opinion.

It would probably be beneath even Donald Trump to order a military strike solely to improve his poll numbers.  That said, you can bet members of his team, maybe even Trump himself, were hoping for the kind of bounce Commanders in Chief usually enjoy at such perilous times.

Perhaps the lack of support reflects the old adage that times of crisis don’t build character, they reveal it.