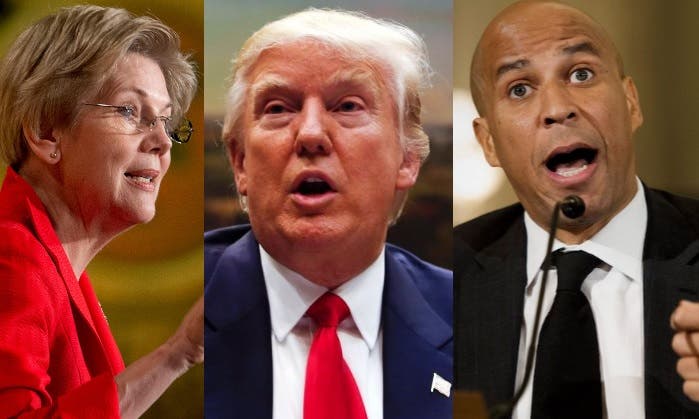 Today, President Obama’s fiduciary rule was supposed to go into effect, keeping predatory financial advisors and their parent companies from taking advantage of retirees who might not fully understand the complexities of investment sorcery.

But President Trump has issued a 60-day delay and is moving to kill the rule entirely. Senators Elizabeth Warren (D-MASS) and Cory Booker (D-NJ) penned a brutal op-ed in the Huffington Post exposing how Trump and his cronies are scheming to allow bankers and investment “advisers” to steal billions of dollars from retirees just trying to live their twilight years in peace and comfort.

While 60 days may not seem unreasonable, the Economic Policy Institute projects that over two months, the fiduciary rule delay will cost retirees in America a shocking $3.7 billion dollars. If the rule is killed, it will end up being a $17 billion loss for senior citizens – and a windfall of profit for Wall Street.

Warren and Booker explain how the fiduciary rule helped American consumers before it was even implemented – and how Trump has abandoned his promise to stand up the financial sector and defend the American people.

Even though the rule hasn’t been fully implemented yet, it’s already benefitting working families. Because the proposed rule was scheduled to go into effect, some major investment firms have slashed prices on their funds.  Some have taken their worst, highest-fee products off the shelves. Others have eliminated some of the most predatory commission-based sales practices altogether, and some have even created brand new products that are less expensive and better for consumers. In other words, the facts are clear: this rule is good for investors and good for advisers who put their clients first.

But despite these clear benefits, the Trump White House has picked special interest and industry groups over hardworking Americans. He has picked giant corporations over retirees.

Saving for retirement is hard enough. Recent reports suggest that nearly one-third of working Americans have no retirement savings through a pension or 401 (k). The least Washington can do is stand up to special interests and make sure the money Americans do manage to save isn’t being siphoned off by predatory financial advice. Hardworking Americans shouldn’t have to worry that their advisers don’t have their best interests or their financial security in mind. It’s time for President Trump to get on board with the fiduciary standard — or get out of the way by letting this common-sense rule come into effect. Americans have already waited long enough.

It’s clear that Trump and his coven of Goldman Sachs oligarchs are plotting to repeal every protection the American people have against the insatiable greed of Wall Street. The repeal of a rule that keeps elderly folks safe from the machinations of hucksters and grifters like Trump is an unconscionable decision, and we must make sure every American is aware of what the Republican Party has in planned for our nation.