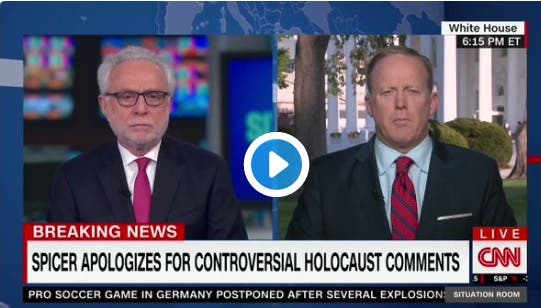 Trump Just Insulted The Pope Like No Other President Has Before

While Sean Spicer was giving an “apology” to CNN‘s Wolf Blitzer for going off the rails into full-on Holocaust revisionism during today’s press conference, he also made a very interesting Freudian slip.

“It was my blunder, as you put it, correctly, and I came out so we can stay focused on what the President’s doing and his decisive action, I needed to make sure that I clarified and was not in any way shape or form any more of a distraction from the President’s decisive actions in Syria and the attempts that he’s making to destabilize the region and root out ISIS out of Syria.”

The use of the word destabilize is very curious because it’s the second time in two days that he has praised President Trump’s efforts to destabilize the Middle East.

Given that the region is still chaotically unstable from the last time the United States intervened in Middle Eastern affairs and invaded Iraq in 2003, it’s terrifying to think of what might be prompting Spicer’s Freudian slip.

It’s well known that Trump’s administration is full of neocons who are obsessed with toppling the Iranian regime and have active elements – like Chief Strategist Stephen K. Bannon – who are pushing for conflict with the Islamic Republic of Iran. Perhaps the idea has gotten into Trump’s head to try to play liberator and remove Syrian dictator Bashar al-Assad from power. Or maybe his friends in Saudi Arabia are whispering in his ears about the need to take care of the Shia Houthi rebels and al-Qaeda groups in Yemen.

No matter what the cause might be, his continual repetition of Trump’s efforts to destabilize the Middle East should be a major cause for concern.

Spicer literally just said Trump is trying "to destabilize the region" during his #holocaustcenter apology pic.twitter.com/tWrn1rEODQ