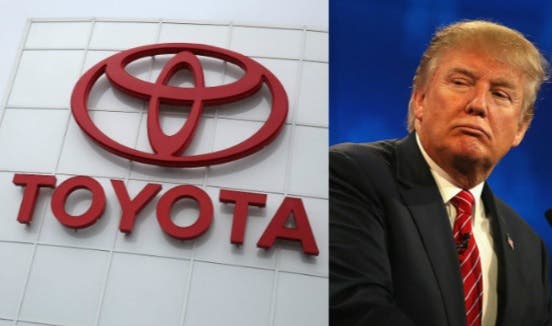 Today, President Trump held a “town hall” with an assortment of CEOs, and once again claimed credit for investment announcements that were announced under the Obama Presidency.

This time, he celebrated Toyota’s announcement of a $10 billion investment in the United States over the next five years.

Trump said that “they wouldn’t have made this investment if we hadn’t won the election” during today’s press conference. Yesterday, his press release touted the move as “further evidence that manufacturers are now confident that the economic climate has greatly improved under my administration.”

But as usual, Trump had nothing to do with Toyota’s decision – which North America chief executive Jim Lentz noted in an interview with NBC yesterday:

Lentz said in an interview at the Detroit auto show the decision is not a response to Trump but part of the automaker’s business strategy to invest in the United States, where it has 10 plants in eight states.

Lentz said the planning for the new Mexico plant began about two years — if not earlier — before it was announced in 2015. These are long-term decisions, he said. Lentz said he has not spoken with Trump.

Company spokesman Scott Vazin similarly told the New York Times that the move had nothing to do with Trump:

Asked if Mr. Trump’s policies played a role in the decision, Mr. Vazin said, “No, but we do share his goal of growing the economy and jobs in the U.S.”

Trump has previously criticized Toyota for moving production of the Corolla line of small vehicles and is trying to paint Toyota’s latest investment as a response to his toothless threats. The truth of the matter is that Toyota makes a substantial investment into the United States every five years, as it has done for the past sixty years.

This investment is an upgrade on factory tools for the production of the 2018 Toyota Camry, which requires more modern technology to accommodate the new design, which was created “four or five years ago” – meaning this investment has been in the works for quite some time now.

Toyota’s investment will not create any jobs, which Trump failed to address during this morning’s remarks. He also failed to mention that Kentucky gave Toyota $43.5 million in tax incentives.

It’s just another reminder that President Trump has yet to actually accomplish anything beyond taking credit for the business decisions made by others.