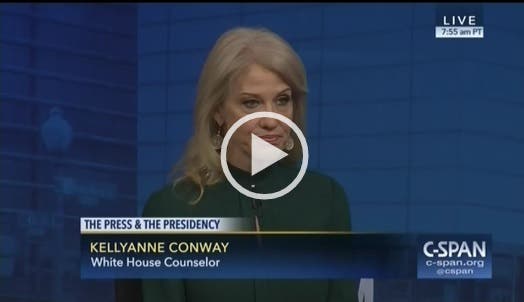 White House Special Advisor and Trump’s former campaign manager Kellyanne Conway is notorious for her tenuous relationship with the truth. Conway famously coined the term “alternative facts” to describe the outrageous lies that she regularly feeds to the press.

Her biggest fib was the invention and subsequent doubling-down on the story of the terrible “Bowling Green Massacre,” a terrorist attack which never happened and which was in fact a shameful plot by the FBI to frame two Iraqi immigrants as terrorists.

While speaking at the Newseum this morning, Conway had the gall to complain about the mainstream media making things up – and the crowd laughed her off the stage.

The hypocrisy is so offensively outrageous that it’s hard to understand how Conway didn’t spontaneously combust on the spot.

Kellyanne Conway is one of the most shameless partisan hacks to ever disgrace the airwaves, lying so often and so effortlessly that it is literally impossible to tell when she is telling the truth. Interview host Michael Wolff made sure to come out and tell her right to her face that she in fact is everything that is wrong with the media today:

Michael Wolff to Kellyanne Conway. "You are the darkness." pic.twitter.com/OGihhtaSuU

It is people like Kellyanne Conway that perpetuate false narratives and conspiracy theories, using their positions of authority to lie and distort to an admittedly gullible and polarized public.

Conway herself has been a leading proponent of the “fake news” and openly works to ruin the credibility of the mainstream media to the point where the truth is malleable and ready to be exploited by an authoritarian leader.

For her to have the nerve to walk out and tell a crowd that no, it’s the real journalists who are lying and inventing facts is all the proof we need that irony is well and dead in the United States.