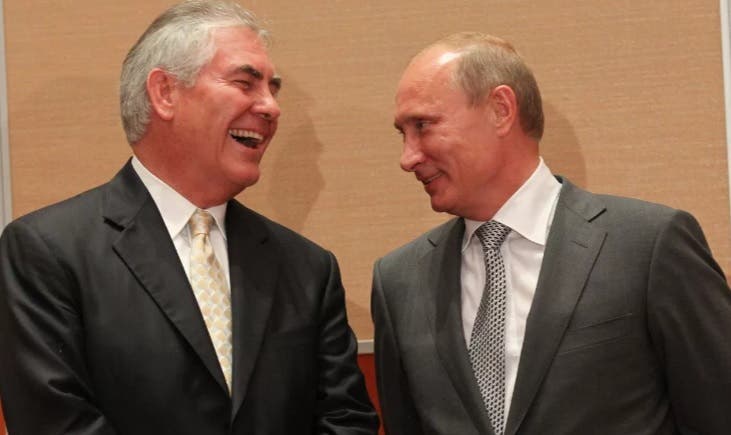 President Trump’s Secretary of State, Rex Tillerson, visited Moscow this week. After originally being refused a meeting in a hollow attempt to feed the narrative that Trump isn’t beholden to Russian dictator Vladimir Putin, Tillerson was admitted to the Kremlin to see his old friend today.

For some peculiar reason, however, Rex Tillerson didn’t want the United States press corps to be present when he met the man who once gave him an Order of Friendship medal for negotiating a $500 billion oil deal while he was the CEO of Exxon-Mobil.

If you're wondering why the US press doesn't have pictures of Secretary Tillerson at the Kremlin, that's because he ditched his press pool

The decision to ditch the press pool is a very deliberate one, allowing Tillerson to dodge any uncomfortable questions regarding the Trump administration’s potentially treasonous collusion with Russian agents, or regarding Russia’s complicity in the war crimes committed by the regime of close ally Bashar al-Assad, or regarding Tillerson’s bizarre statements about the American taxpayer “not caring” about the Ukraine, where Russia is fighting a covert war against the government.

It also means that the only media presence on hand was Russian state-run propaganda outlets. Whether he was deliberately avoiding difficult questions or seeking to minimize the visibility of his visit is unclear; but either way, it’s extremely suspicious behavior that just makes it all the more obvious that the Trump administration is hiding something.