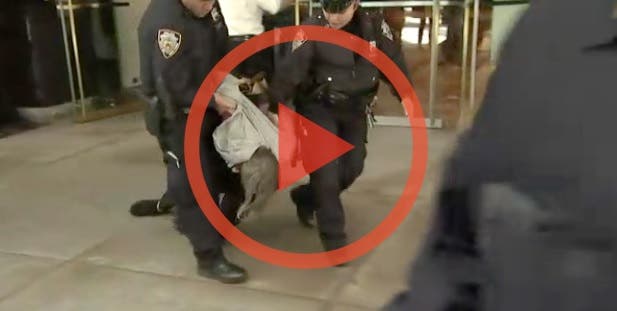 This Professor Correctly Predicted Trump’s Win. He Just Made Another Prediction…

A disturbing scene played out today at Trump Tower in New York, where at least 50 members of the RiseAndResistNY protest group temporarily occupied the foyer of Trump’s home before being forcibly removed by the police.

The protesters were demonstrating for the rights of immigrants and decrying both Trump’s un-American immigration crackdown and for his delusional plan to build a giant wall across the southern border with Mexico. They hung up banners that read “No bans,” “No wall,” “No raids,” and chanted the same.

Protesters are seated at the Trump Tower elevator banks, the banners are torn down. They won't leave until arrested. pic.twitter.com/ezfaUCM4bt

On cue, a veritable army of cops showed up to remove the protestors, some of whom were forcibly dragged out before being arrested.

Over a dozen NYPD officers show up with zip ties to the 57th street entrance as tourists look on excitedly. pic.twitter.com/ogMFXVWHLg

Arrested protesters dragged and carried out of Trump Tower, some elderly. They shout their names to jail support, shouting "No ban, no wall" pic.twitter.com/fKFJ1BKkjh

We applaud the protestors for their bravery and sincerely hope that the NYPD doesn’t mistreat them. We as a people must continue to resist and to protest President Trump’s racist agenda at every turn.

Support Rise and Resist NY by following them on Twitter.