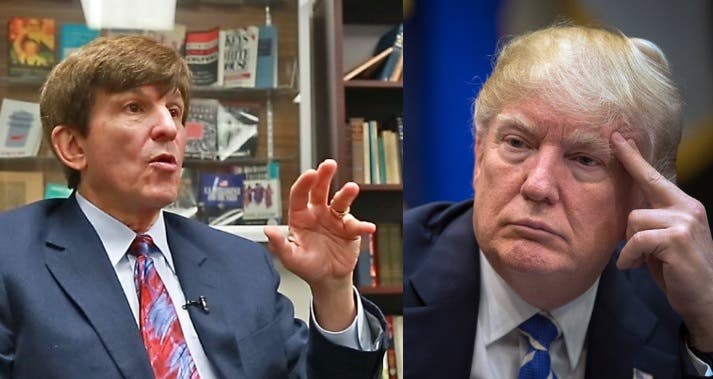 American University Professor Allan Lichtman was the first person to predict that Donald Trump would win the 2016 presidential election. Using an arcane formula based on current White House party occupancy popularity, he became a viral sensation for what was widely viewed as a ridiculous assertion.

Unfortunately for us all, he turned out to be correct. Trump’s transition team even reached out to him to congratulate him, incorrectly interpreting his prediction as support.

However, Professor Lichtman has a second prediction that Trump won’t find nearly as pleasing. His latest book is titled “The Case for Impeachment” and shared a copy with POLITICO. In it, he writes:

“Taking time out of preparing to become the world’s most powerful leader, he wrote me a personal note, saying ‘Professor — Congrats — good call. What Trump overlooked, however, was my ‘next big prediction’: that, after winning the presidency, he would be impeached.”

He goes on to explain that “explain how Trump threatens the institutions and traditions that have made America safe and free for 230 years, and I’ll make clear why a Republican Congress might impeach a president of its own party.”

In his book, Lichtman details all the possible reasons that could lead to Trump’s impeachment, beginning with the obvious Trump-Russia scandal but delving deeper into his past crimes like Trump’s racist housing violations, his charity fraud and the elaborate scam publicly known as Trump University, all of which could be used as grounds for impeachment.

He might even have set himself up for impeachment, writing that “Trump’s disregard for lying in sworn testimony, examined in the context of the Bill Clinton precedent, shows how Trump’s opponents could set an impeachment trap for him through a civil lawsuit.”

While he gives Trump some advice for avoiding impeachment, like “curb the Mussolini act” and fire white supremacist Stephen Bannon, it’s not likely that the notoriously stubborn Trump would ever listen to it.

Democrats are openly planning to impeach Trump should they retake the House in the 2018 midterm elections – but if Lichtman is correct, we could be rid of Trump much sooner than that.