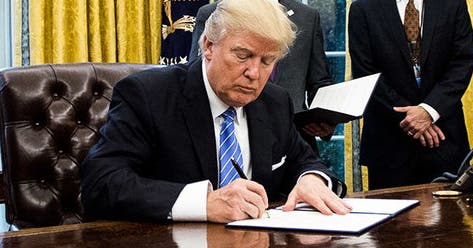 Today, President Donald Trump signed a bill that has been high on right wing wish lists for a long time. The new law allows states to withhold medical reimbursements from healthcare providers for purely political reasons, reversing an Obama-era rule that prohibits the practice.

While the law’s language is broad in scope, nobody on either side of the aisle is disputing that the true intent is to gut the funding of Planned Parenthood. On the Republican side, some are even admitting that the legislation is politically driven.

Marjorie Dannenfelser, president of Susan B. Anthony List, a national anti-abortion group, released a statement that read, “Prioritizing funding away from Planned Parenthood to comprehensive health care alternatives is a winning issue.”

National polls indicate that Dannenfelser’s statement is false for two reasons. Polls show that the majority of Americans support a woman’s right to choose.

Second, winning issue or not, defunding Planned Parenthood is defunding comprehensive healthcare. Millions of women utilize the organizations services every year for healthcare they may not be able to be able to access elsewhere, and only three percent of funding goes toward abortion.

Among its many services, Planned Parenthood annually provides women with 270,000 Pap tests, more than 360,000 breast exams, more than 4.2 million tests and treatments for sexually transmitted infections, and educational programs and outreach to 1.5 million young people and adults.

This move is transparently and admittedly political, and we have learned to expect as much from this Congress and President. But this is also a major blow to women across the United States, and that must not be tolerated. America’s women deserve better than a government that will sacrifice their wellbeing to score political points.

We will not rest until we have exactly that.