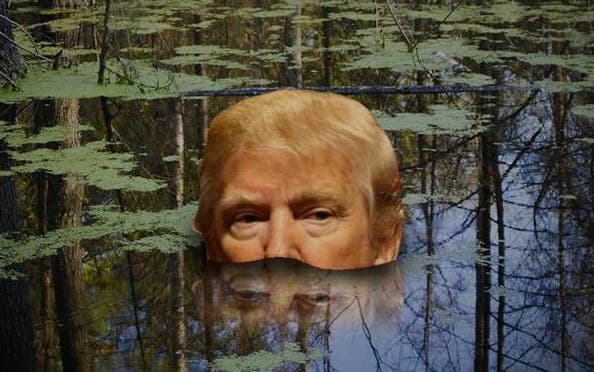 Donald Trump campaign promise to drain the swamp has grown as moldy and sodden as a dead alligator carcass.

The raft of Washington insiders and Goldman Sachs executives holding prominent roles in the Trump administration should have been enough to convince the suckers who voted for the President that his promises have as much value as stock in one of his bankrupt casinos. Now, The New York Times just revealed that it’s even worse than we thought.

In a report published today, the Times states that:

President Trump is populating the White House and federal agencies with former lobbyists, lawyers and consultants who in many cases are helping to craft new policies for the same industries in which they recently earned a paycheck.

No big surprises there, but the paper goes on to reveal that their investigations show that at least two appointments may have already violated the Trump administration’s already watered-down ethics rules. The problem is that it is virtually impossible to know whether they actually are violations since the White House has been secretly issuing waivers to its own rules.

One prominent example, found by The NY Times involves the top Trump energy advisor, Michael Catanzaro, who until recently was a lobbyist for major energy companies like the Oklahoma-based oil and gas company Devon Energy, and Pennsylvania’s Talen Energy, an electric utility that uses coal as its primary fuel source. As a representative of those and other companies, Catanzaro fought against Obama-era environmental regulations, including the landmark Clean Power Plan.

Then there’s Chad Wolf, Chief of Staff for the Transportation Security Administration. His lobbying activities included pressing Congress to fund a new carry-on luggage screening device made by a company he worked for. Now, the agency he works for is testing the device for a possible purchase worth hundreds of millions of dollars.

These examples are just the tip of the iceberg. According to The Times:

Trump White House officials had over 300 recent corporate clients and employers, including Apple, the giant hedge fund Citadel and the insurance titan Anthem, according to a Times analysis of financial disclosures. (The White House has released disclosures for only about half of its roughly 180 current senior political employees.) And there are more than 40 former lobbyists in the White House and the broader federal government.

The prevalence of former lobbyists in the administration is at least partially due to the executive order that Trump signed shortly after his inauguration eliminating the Obama-era regulation preventing people from taking jobs in agencies that they had lobbied during the past five years. That ruling affected nearly four thousand positions in the executive branch.

Trump also made it much simpler to obtain waivers allowing administration officials to rule on matters that would help their former clients.

The director of the Office of Government Ethics, Walter M. Shaub Jr., who is mandated with assisting the White House in complying with federal ethics laws, told the Times that:

“There’s no transparency, and I have no idea how many waivers have been issued.”

The granting of such waivers, he said, has become “a political decision, which means career government ethics officials should not get involved in waivers under the new executive order.”

In other words, if Trump was planning on “draining the swamp”, it was so he could install a new swamp, bigger and more corrupt than any swamp we’ve ever seen before.