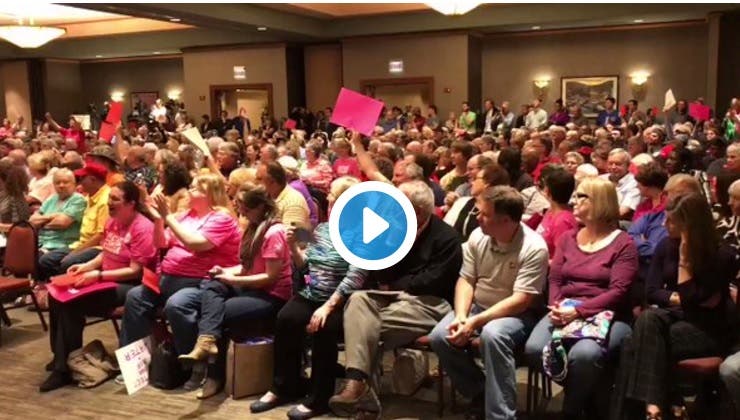 It would appear the tides are turning against President Trump and his ship of fools. During a town hall meeting held by Sen. Tom Cotton (R-AR) and Rep. French Hill (R-AR) in deep-red Little Rock, Arkansas, the crowd erupted in cries of “LOCK HIM UP!” when Cotton dared to compliment Trump’s foreign policy.

The displays of fruitless aggression and primitive manhood-waving that summarize President Trump’s foreign policy have accomplished nothing but to kill more than a thousand innocent civilians in a month of bombings and to bring us to the brink of nuclear war with North Korea.

The irony of seeing voters yell for Trump’s arrest barely two months into his presidency is simply delicious. Trump campaign advisor Gen. Michael Flynn began the “LOCK HER UP” chant at the Republican National Convention in Cleveland last summer. Now it’s Michael Flynn who is desperately trying to avoid jail while voters scream for Trump’s imprisonment.

Life comes at you fast, as they say.

As the investigation into President Trump and his team’s potentially treasonous collusion with agents of the Russian Federation during the 2016 election gains steam, it’s looking likelier than ever that these Arkansas voters might soon get their wish.