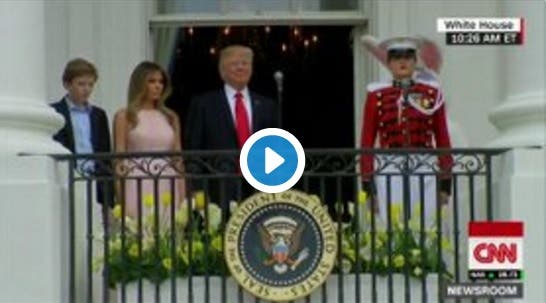 Today, President Trump finally flew back from his four-day vacation Florida to hold the annual White House Easter Egg Roll – and committed a stunning faux pas that will leave you incensed.

During the singing of the National Anthem, First Lady Melania and her son Barron knew to put their hands over their hearts – but Trump didn’t, or forgot to, and had to be reminded by Melania to put his hand over his heart.

While that may not be the biggest deal in the world, the hypocrisy is incredible. Trump and the rest of the conservative establishment publicly pilloried San Francisco 49ers quarterback Colin Kaepernick for kneeling instead of standing during the national anthem at football games.

“I think it’s personally not a good thing, I think it’s a terrible thing. And, you know, maybe he should find a country that works better for him. Let him try, it won’t happen” said Trump of Kaepernick’s symbolic protest.

Forcing someone to stand in respect for the national anthem, as Trump and Republicans want to do, isn’t patriotism, it’s fascism. Patriotism is willingly standing and placing your hand over your heart because you truly love your country and are dedicated to serving it as best as you can.

But Donald Trump can’t even be bothered to show respect for the anthem at the White House.

Imagine if President Obama had forgotten to put his hand over his heart. Conservatives would have howled with rage, questioning his dedication to our nation and his eligibility to the office.

But when it comes to Trump, who has spent the majority of his presidency on the golf course, the right-wing has nothing to say.