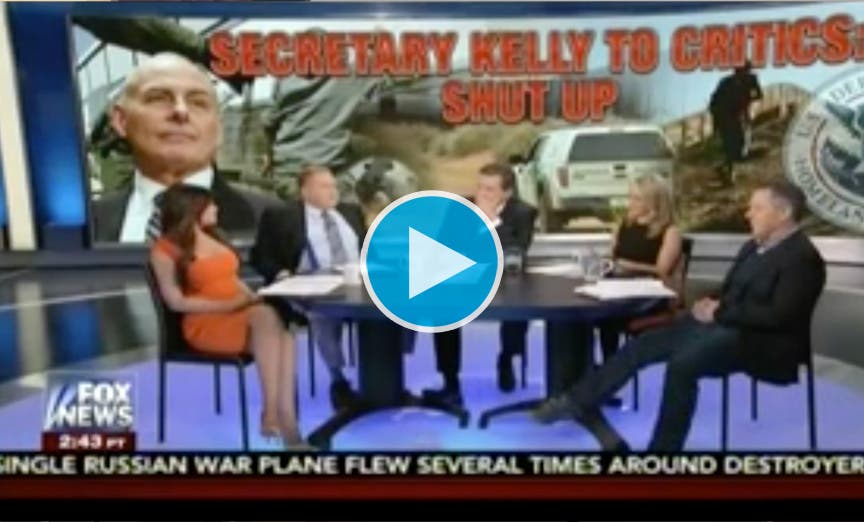 Only hours after Fox News publicly parted ways with serial sexual harasser Bill O’Reilly, they have another embarrassing ‘locker room’ scandal on their hands.  This one happened live on the air during the afternoon round table show, “The Five.”

For those unfamiliar with the set-building and camera positioning practices at Fox News – not to mention their dress code – the tables for these multi-host shows are designed in such a way that the people sitting on either end of them will have their legs fully exposed to viewers.  Coincidentally, perhaps, a woman in a relatively short skirt inevitably finds herself in the end-seat closest to the camera.

On “The Five,” that woman is almost always the witty and attractive Kimberly Guilfoyle.  Guilfoyle found herself in a testy exchange today with Bob Beckel, the lone liberal co-host.

After Guilfoyle called Beckel a “Crybaby,” Beckel made a comment about the appropriateness of Guilfoyle’s notorious little-left-to-the-imagination dresses.

As awkward as that exchange was, what happened next involving conservative co-host Greg Gutfeld is probably giving Fox News’ already over worked damage control PR team nightmares as we speak.

BOB BECKEL (CO-HOST): Instead of cutting every fact I’ve got and just saying, and laughing it off, because it’s — you know, it’s four to one as it is. You might want to take some facts you don’t like, because a lot of them have do with —

BECKEL: Call your dressmaker, I mean —

GREG GUTFELD (CO-HOST): You are giving America a raise.

For a company losing millions in ad revenue because of its reputation for condoning sexual harassment from its senior male leadership on and off camera, this wasn’t the fresh start they were looking for.

A video of the segment is below.