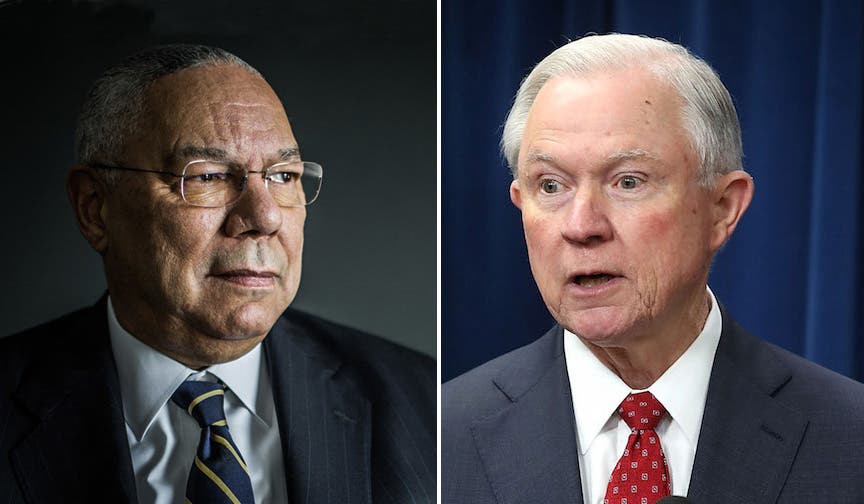 Powell sat down for an interview with Mic in New York during the 20th anniversary Summit for America’s Promise Alliance, a group he founded “to create the conditions for success for all young people, including the millions currently being left behind.”

The Summit focused this year on the increased rates in which young people are encountering law enforcement and the criminal justice system – all at younger and younger ages.  According to Powell, the Trump Administration should be seeking to reduce those rates.

Instead, Trump’s top law enforcement official penned an op-ed in USA Today earlier this week calling for an increase in what he called ‘proactive policing,’ and a reduction in ‘harmful federal intrusion’ to combat what he characterized as a ‘surge’ in violent crime in American cities.

Translation?  Trump and Sessions want more arrests in our urban centers, and they don’t want to hear any whining about it, not from the feds, not from anyone.

Not so fast, according to Colin Powell.  When it comes to the Attorney General, he is urging people to, “watch very carefully and, if people think that what he’s doing is inconsistent with what we need to be doing, then we will speak out.”

What’s peculiar about the Trump Administration’s tough-guy talk on crime is that crime rates are at or near historic lows – and they know this.  Sessions himself told a gathering of local and federal law enforcement officers in Virginia in March that, “Overall, crime rates in our country remain near historic lows.  Murder rates are half of what they were in 1980. The rate of violent crime has fallen by almost half from its peak.”

In the same speech, however, sessions pointed to the lone exception to those decades-long trends that appears to be the basis for the sweeping reforms to policing and incarceration they hope to enact.  “The latest FBI data tell us that from 2014 to 2015, the violent crime rate in the U.S. increased by more than 3 percent — the largest one-year increase since 1991.”

While the statistics he cites are accurate, they don’t tell the whole story.  The increases are mostly attributable to just a handful of cities, including Chicago, Baltimore, St. Louis, and Milwaukee.  The rest of the country has hovered near their historic lows. Even the nation’s largest city, New York, saw a record low violent crime rate in the 2014-15 year that Sessions cites, the lowest since the NYPD began tracking it.

None of that seems to matter.  Attorney General Sessions believes more incarceration and less scrutiny of police is the answer to a crisis he admits might just be an outlying uptick on a overwhelmingly downward trend. He even thinks anyone who disagrees with that premise is anti-police.

“Amid this plague of violence, too much focus has been placed on a small number of police who are bad actors rather than on criminals. And too many people believe the solution is to impose consent decrees that discourage the proactive policing that keeps our cities safe,” he wrote in USA Today.

Powell’s not letting that attempt to divide communities stand.  While he and others will be keeping an eye on the policies this administration rolls out, he makes it clear he’s not anti-police.  “You can’t say, ‘We should disinvest the criminal justice, police and courts.’ They’re there not just to protect white folks. They’re there to protect black folks as well.  What they want is fair and balanced justice treatment for all Americans.”

You can see a video of the interview from Mic here.