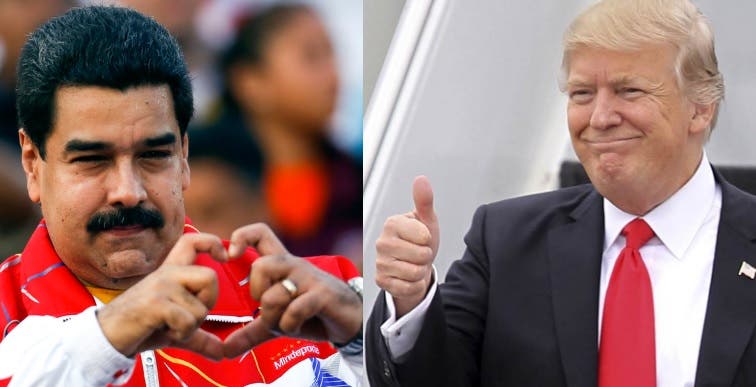 Newly filed federal campaign records show, Maduro’s regime gave half a million bucks to Donald Trump to help him throw a party in Washington, D.C. Through the state-owned Citgo Petroleum, Maduro’s government dropped that cash to Trump’s inaugural committee: one of the largest corporate donations listed on the newly filed federal disclosures.

If it seems odd that a self-branded socialist revolutionary who blames most of his ills on evil American plots would give so much cash to the new U.S. president, it shouldn’t. Maduro, though talking tough domestically, has worked hard not to overly antagonize Trump.

As NPR reports, Trump turned the inaugural party into his personal ATM, which is probably why Citgo made their donation:

The money also bought time with the president and vice president — those donating more than $500,000 were treated to dinner with Vice President Pence and his wife, Karen.

One can only wonder what was so important that Citgo dropped all of that cash just to meet VP Pence.

In light of the Venezuelan oil company PDVSA’s new and rather dubious financing arrangements mortgaging their interest in Citgo in order to borrow money from the Russian state-run oil company Rosneft last November, they may have had a pretty strong ulterior motive to gain access to the highest levels of our government.

If Venezuela cannot pay the Russians back, they’ll lose control of Citgo, which controls about 5% of gas refining capacity in the USA, which is enough to impact prices at the pump for all Americans.

Here’s a copy of Citgo’s donation records from the Trump Inaugural team’s records:

Yesterday’s protests in Venezuela were the largest since the death of their demagogue ex-President Hugo Chavez, to whom Donald Trump has been compared numerous times (like here, here and here).

Venezuela’s official inflation rate is a whopping 274% and economists believe the real rate to be much, much higher. How bad is it in Venezuela right now? Last year, the Los Angeles Times reported that a dozen eggs costs $150 dollars.

But none of that stopped Donald Trump from accepting the gift from Citgo, their state-run oil company’s American division.

Amazingly, Donald Trump’s inaugural raised a record $107 million dollars – twice that of Obama’s 2009 inaugural – even though there were precious few people brave enough to attend.

Meanwhile, Venezuelan citizens are rising up to battle their totalitarian government, which began as a populist political movement led by a loudmouth demagogue, who proceeded to rapidly re-write their constitutions and laws to turn the country into a democratic dictatorship.

Hopefully, America’s rule of law continues to check Donald Trump’s oligarchic regime long enough that we never see violent reactions to protests by our government, like the Venezuelan government is perpetuating upon its beleaguered people today.

Take a look at what happens when a demagogue ruins the democratic institutions of a wealthy country:

Tens of thousands took to the streets of Venezuela in what the opposition calls "the mother of all marches." pic.twitter.com/kwFmXQTZKe

This is what the protests in #Venezuela look like. Imagine this 40 sec. happening for hours. #19A pic.twitter.com/gbQ3SaKctK

Protesters in Caracas pushed back by government security forces launching tear gas. Pics from sources on the ground #Venezuela #19A pic.twitter.com/v4xCruQPU1