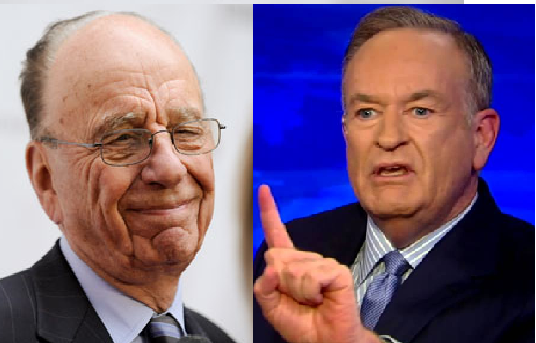 On Wednesday Bill O’Reilly, the contemptible and scandal-ridden Fox News host, was finally fired after weeks of speculation about his future at the company. O’Reilly was forced out after sexual harassment claims made against him were disclosed to the public.

But a media analyst has revealed yet another more decisive reason why O’Reilly was fired. Oh, and before you jump to any conclusions, it has absolutely nothing to do with the fact that O’Reilly is a sexual predator, and everything to do with Fox owner Rupert Murdoch’s bank balance.

Fox News and the parent company, 21st Century Fox, came under increasing pressure to drop O’Reilly after an April 1st article published by the New York Times revealed that the two companies have consistently supported O’Reilly in the face of numerous sexual harassment complaints, the settlements for which have cost the organization as much as $13 million.

In addition to the legal settlements, advertisers began pulling their ads from Fox altogether, a development that no doubt played a decisive role in the eventual decision to oust him.

However, Claire Enders, a media analyst and founder of Enders Analysis, told The Independent newspaper that there is more to O’Reilly’s firing than meets the eye at first glance. Rupert Murdoch has been on a quest to take over European broadcaster Sky for years. His previous attempt at a takeover was stopped by UK regulator Ofcom in 2012 on the grounds that his sons were not a “fit and proper” people to run such a company.

This decision was made in the wake of the phone hacking scandal, during which it was discovered that British tabloid newspapers owned and run by Murdoch and his family routinely and systematically bribed individuals and hacked the communications of celebrities and politicians in order to get stories.

His sons James and Lachlan are soon set to appear in front of Ofcom, who will once again decide whether they are “fit and proper” enough to run Sky next month. Lachlan Murdoch is currently executive co-chairman of 21st Century Fox, while James is the CEO. Ofcom will be basing their decision, in part, on how they have run the company.

The revelation that their company gave favorable treatment to a serial sex abuser will not play in their favor, and Enders surmises that the impending Ofcom ruling “was a factor.” She adds:

They can’t possibly need another scandal of corporate governance on how they deal with Bill O’Reilly. They don’t need any questions over the good old boys network and how Rupert Murdoch puts his pals first.

Reports have suggested that Murdoch wanted to keep supporting O’Reilly, but was convinced otherwise by his sons, who saw the anchor’s position as untenable. Enders adds:

Murdoch’s $15 billion takeover has caused a stir in the UK. Politicians have called for Ofcom to block it, arguing that by owning Sky, the UK’s most popular cable network, in addition to Murdoch’s other holdings which include The Times, The Sunday Times and The Sun newspapers, Murdoch would be able to wield excessive influence over the British media.

A lawyer representing some of O’Reilly’s accusers has already written to Ofcom, detailing how Murdoch and his sons like to run their business:

The similarities between the current harassment scandal and the phone-hacking scandal reveal the company’s approach to business and management – a lack of oversight, intervention, and decency.

Now that O’Reilly is gone, it is possible that companies will begin returning to Fox, while Enders comments that O’Reilly’s firing “will reflect well on James Murdoch and the management of 21st Century Fox.” If the Murdochs are successful it will be bad news for British media impartiality.

Make no mistake: O’Reilly’s firing had nothing to do with protecting women from future assaults by O’Reilly or seeking justice for his victims and everything to do with the Murdoch’s protecting their wallets and their bid for a media monopoly in Britain.

This is the pinnacle of cynicism and yet another example of the heinous values that Fox News stands for.