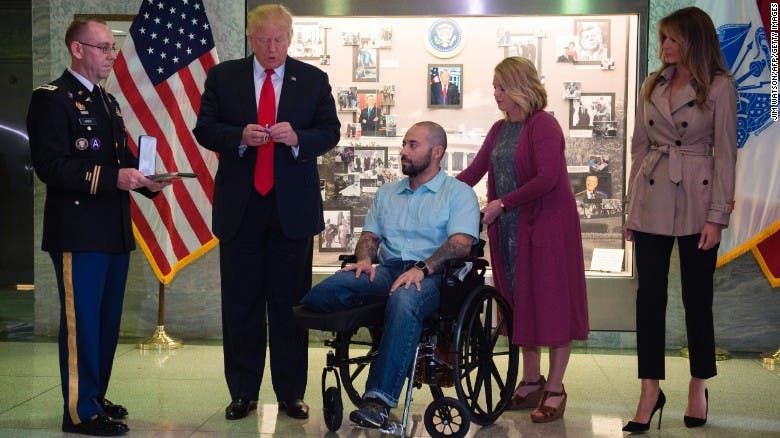 The White House propaganda machine at Fox News was back at it early this morning.  A report appeared about how the President and First Lady braved the short ride over to Walter Reed Medical Center in suburban Maryland to meet Army Sgt. 1st Class Alvaro Barrientos and his wife and present the Purple Heart to him.

Sgt.1st Class Barrientos is recovering from a debilitating leg wound suffered in combat in Afghanistan.  When the President heard he was at Walter Reed and scheduled to receive the Purple Heart, he reportedly said, “I wanted to do this myself.”

The Fox News report ended there, but according to a pool reporter who witnessed the ceremony, there’s more to the story.

As the successor to the Badge of Military Merit created by George Washington himself, the Purple Heart is the oldest decoration continuously awarded to members of the U.S. military.  The modern version was created to honor soldiers killed or wounded in WWI, and it’s been awarded to all men and women in uniform who have been killed or wounded in combat since 1917.

It’s a solemn recognition of sacrifice in service of our country, NOT a winning hand at poker.  “Congratulations” is about the most inappropriate thing anyone can say to someone who’s just received it.  ‘Thank you’ would have sufficed.

This isn’t the first time Trump has failed to grasp the solemnity and significance of the decoration.  In August 2016, at a campaign rally, he told a story about how he received his Purple Heart – from a retired military supporter.

“I said to him, ‘Is that like the real one, or is that a copy?  And he said ‘no, that’s my real Purple Heart. I have such confidence in you.’  And I said, ‘Man, that’s like big stuff.’  I always wanted to get the Purple Heart.  This was much easier!”

Sgt. 1st Class Alvaro Barrientos is a hero, and we cannot thank him enough for his sacrifice.  It’s just too bad his Commander in Chief only thinks about the  photo-op and doesn’t care to learn about the significance of this man’s service.