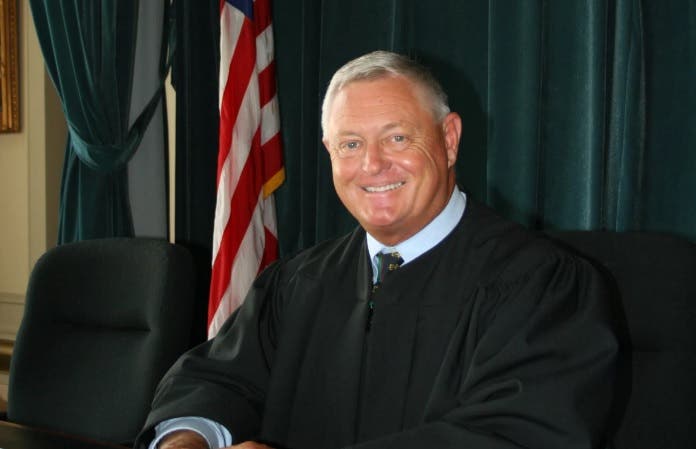 Actor Christian Bale Was Just Asked About Pres. Trump. His Answer Is Perfect

A Republican Appeals Court Judge in North Carolina took the bold step today of resigning in advance of his forced retirement (because of age) in order to allow a Democrat – and the state’s first openly gay judge  –  to be appointed in his place,

Judge J. Douglas McCullough’s heroic stand against an out-of-control Republican legislature stymies their efforts, at least temporarily,  to take control of judicial appointments away from the recently elected Democratic governor.

The legislature’s power grab follows a series of judicial rulings which interfered with their ultra-conservative, far-right wing legislative agenda to over-reach the normal rights of the office holders,

McCullough is not only a Republican but also a conservative and a former federal prosecutor. However, the North Carolina Republican-controlled legislature’s attack on an independent judiciary has so angered him that he acted to let Democrat John Arrowood take his place.

“In its quest for total domination over state politics,” reports Slate, “the General Assembly is driving away even its former allies. McCullough deserves credit for taking a stand against its ongoing legislative coup.”

As part of its plan to control the judiciary, the legislature voted to reduce the number of appeals court judges from 15 to 12, which was done to take away the power of Governor Roy Cooper to appoint their replacements.

On Friday, Cooper vetoed the bill to reduce the court size. This week, the legislature was expected to override the Governor’s veto. However, by his quick resignation 36 days before he was to retire, MCullough made it possible for Cooper to immediately appoint his replacement instead for the year and a half remaining on his term after a 2010 election.

McCullough has said he was against reducing the side of the Appeals Court because it meets to judge cases in groups of three, and there are already too few justices to handle the load.

“I did not want my legacy to be the elimination of a seat and the impairment of a court that I have served on,” McCullough told the Charlotte News-Observer early today.

The legislature still plans to vote to shift appointment of judges away from the Governor completely and handle it within the General Assembly.

Once one of the most fair-minded states in the South, in recent years North Carolina’s government at almost all levels has been taken over by the conservative and extremist Tea Party Republicans who have passed laws that do everything from make it harder for minorities to vote to the notorious anti-transgender “bathroom bill”.

The bathroom bill was a reaction to President Obama’s move last year to protect the right of transgender Americans to use whichever gendered bathroom they felt more comfortable using. North Carolina passed a law that mandated a person can only use the restroom assigned to the gender listed on their birth certificate.

That brought a devastating boycott by performers, corporations, and even sports leagues. When the NCAA threatened to strip the state of future March Madness playoff games, the legislature rescinded the bill but instead passed one almost as bad.

Cooper, formerly the state’s Attorney General, was elected last November in a very close election. The Republican who lost then signed into law a bill pass3d by the Republican legislator shortly before leaving office that stripped the Governor of many of his duties and powers, including oversight of election boards.

What McCullough has done shows there are still people who serve in government to help the state and its people and not just to enrich its own political party and cronies who donate to its campaigns. He may be a Republican but he is now a real hero to Democrats and to all of the people of his state.