Trump came under heavy fire today for promoting his private resort on a government funded website. After federal ethics experts criticized the shameless plug, the administration was forced to take down the page.

Where the article had previously been hosted on ShareAmerica.gov, an arm of the U.S. State Department, there is now a simple post:

“The intention of the article was to inform the public about where the President has been hosting world leaders. We regret any misperception and have removed the post.” 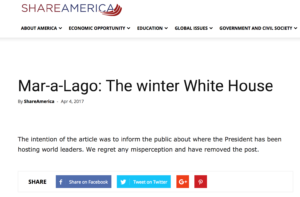 The Mar-a-Lago post was an in-depth profile of Trump’s “Winter White House.” It raised red flags, however, about yet another Trump conflict of interest, as the Florida resort is not a government-owned property, but rather a private business within the Trump Organization .

Multiple members of Congress tweeted their dissatisfaction with the Trump administration’s decision to use official State Department resources to promote the Trump brand.

Yes, I am curious @StateDept. Why are taxpayer $$ promoting the President's private country club? pic.twitter.com/IlPhUlvMwa

The American public is growing weary of watching our tax dollars pilfered on promoting the Trump Organization and lining the President’s pockets. Our government is not Trump’s official marketing arm, despite his attempts to use it that way.