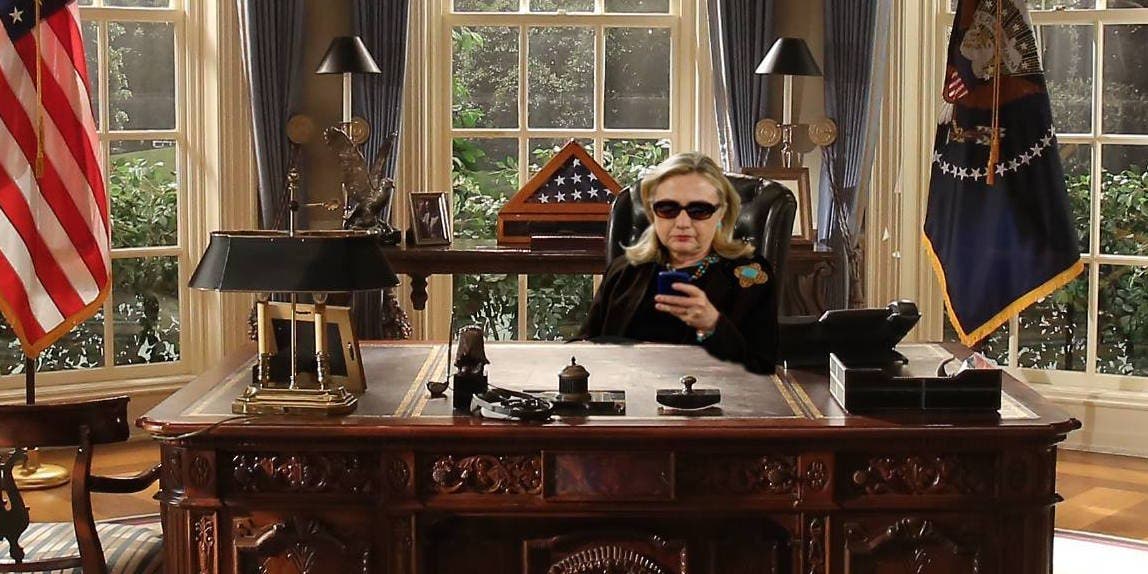 Trump Just Held A Pathetic Korea Briefing, And Even Republicans Are Pissed

Politico explored what this point in time in Hillary’s Presidency would have looked like on an almost day-by-day basis. The article teases, “the very notion of a second President Clinton’s first 100 days conjures visions of perpetual sunshine, a cancer cure and the invention of no-calorie chocolate. But how much would Washington, under a Democratic president and Republican-controlled Congress, have changed really?”

The alternate reality is surprisingly realistic, beginning with Day 1:

In a speech carefully prepared over many months, and drained of lines that might stoke controversy, Hillary Clinton calls for bipartisan unity, avoids laying out a detailed policy agenda and salutes an historic victory for women while former President George W. Bush struggles with his rain poncho. No comparisons are made at any point during the day between President Clinton’s and President Obama’s inauguration crowds. A Gallup poll published that morning shows her approval rating at a respectable 52 percent favorable, 39 percent unfavorable.

Finding themselves in disarray, two moderate Republican senators – Susan Collins and Lisa Murkowski of Maine – announce that they will henceforth be independents, but caucus with Democrats, giving Dems a 50/50 majority with Vice President Kaine serving as the tie-breaking vote.

The article also outlines a few notable points of hypocrisy, such as Chelsea Clinton being named senior advisor to the president and director of the brand new White House Women’s Empowerment Office, for which she receives little to no criticism. Also, Chuck Schumer will invoke the “nuclear option” to get Booker confirmed onto the Supreme Court.

Of course, what Democratic presidency would be complete without a barrage of tweets from @realDonaldTrump? “Day 13” outlines a perfect example:

In the first veto of her presidency, Hillary Clinton rejects legislation to repeal Obamacare—a bill that passes both houses of Congress by narrow margins. GOP leaders vow that once they elect a Republican president, Obamacare will be repealed in “the first week.” Adding to the criticism, @realDonaldTrump tweets: “Obamacare total disaster. We would have repealed it on Day One. Dumb!”

While much of “Hillary’s Presidency” seems banal and predictable by historical standards, it is certainly preferable to the disastrous Trump Presidency, in which he already has the lowest approval ratings of any President in modern history.

If nothing else, it would be worth it to experience “Day 58.”

Corey Lewandowski is eliminated in the first round of ABC’s “Dancing with the Stars.”