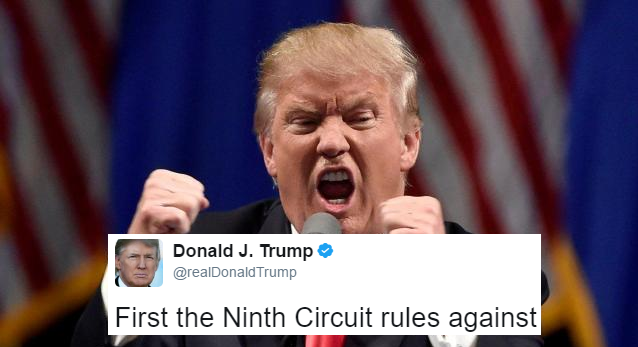 Republicans Just Prioritized Their Own Healthcare Over Americans’

This morning President Donald Trump had yet another tantrum, once again directed at the U.S. judiciary.

First the Ninth Circuit rules against the ban & now it hits again on sanctuary cities-both ridiculous rulings. See you in the Supreme Court!

Out of our very big country, with many choices, does everyone notice that both the "ban" case and now the "sanctuary" case is brought in …

…the Ninth Circuit, which has a terrible record of being overturned (close to 80%). They used to call this "judge shopping!" Messy system.

Trump’s tweets were referring to yesterday’s rejection of his executive order against sanctuary cities. A San Francisco judge blocked the order, which would have withheld funds for sanctuary cities that fail to comply with federal immigration demands, on the grounds that Trump’s administration would have withheld funding for more than just law enforcement, as federal lawyers had argued.

District Judge William Orrick III, appointed during the Obama administration, said that Trump’s order sought to “deprive local jurisdictions of congressionally allocated funds without any notice or opportunity to be heard.” He also added:

And if there was doubt about the scope of the Order, the President and Attorney General have erased it with their public comments.

This is yet another major setback for Trump, who has struggled to win any legislative victories in his first 100 days. The elimination of sanctuary cities was a major part of his campaign after the death of Kathryn Steinle, a 32-year-old woman who was shot dead by an undocumented immigrant in San Francisco last July.

Trump cynically used the death of an innocent woman to advance his own racist, Islamophobic plans for who can enter America. The man has no shame.

Sanctuary cities have frantically opposed Trump’s plans to pull funding from cities that don’t comply with his racist immigration agenda. San Francisco and Santa Clara County have won preliminary injunctions to block the January executive order. They argued that up to $1 billion in funding was at risk if the order was upheld.

This is not the first time the Ninth Circuit court has ruined Trump’s legislative efforts; It was the same court that blocked his controversial Muslim ban.

The White House issued a strongly worded statement after the decision, with Press Secretary Sean Spicer calling the decision an “egregious overreach by a single, unelected district judge”.

Donald Trump has consistently shown contempt for the judiciary. It’s pretty clear that he has no grasp of the system of checks and balances that keep the U.S. government free from tyranny. If he had his way, the courts would serve to merely rubber stamp his agenda.

Thankfully, we have judges and systems in place to stop would-be tyrants like Trump from getting their way unopposed.