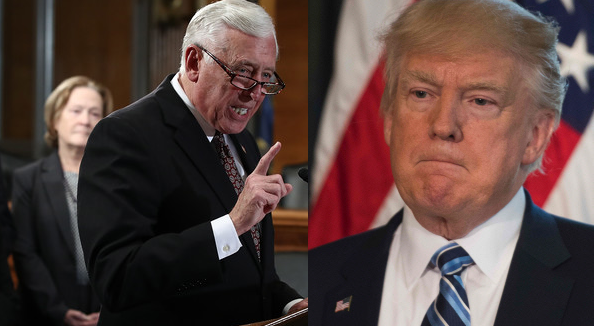 This could lead to another government shutdown.

This is not an empty threat. Republicans are going to need Democrat votes to pass the short-term spending bill thanks to conservatives who are opposed to government funding bills.

Hoyer said in an e-mail:

If Republicans announce their intention to bring their harmful TrumpCare bill to the House Floor tomorrow or Saturday, I will oppose a one-week Continuing Resolution and will advise House Democrats to oppose it as well.

Republicans continue to struggle to find the votes to pass a bill that will kick 24 million Americans off their health coverage, allow discrimination against those with pre-existing conditions, and impose an age tax on older Americans. That’s why they are trying to jam it through the House before their Members can hear from the American people this weekend about their opposition to this horrible legislation.

If Republicans pursue this partisan path of forcing Americans to pay more for less and destabilizing our county’s health care system — without even knowing how much their bill will cost — Republicans should be prepared to pass a one-week Continuing Resolution on their own.

This development comes as bipartisan negotiators are coming close to an agreement in both chambers on a bill that would prevent a shutdown. Republicans are seeking the bill in order to give negotiators time to solve some lasting sticking points in next year’s budget.

Republicans are especially keen to give Trump a win within the 100-day timeline and are trying to drum up support for the new healthcare overhaul. Their last attempt, which included repealing Obamacare, failed last month when Tea Party Republicans blocked it for not being extreme enough.

Hoyer and Democrats, by threatening a shutdown, are trying to destroy any renewed efforts to repeal and replace Obamacare.

It’s a sad day when the only way to stop Trump and Republican’s ideological crusade against the sick and the poor is to threaten a government shutdown. Shutdowns are bad news for everybody. Not only are 1.8 million public workers sent home without pay, but many vital public services are closed until the situation is resolved.

Let’s hope it doesn’t come to that.