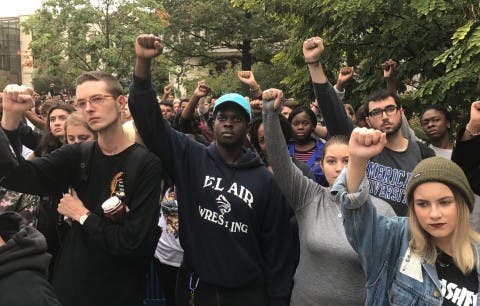 An investigation is underway at American University in Washington, D.C. after bananas were found dangling from nooses at several spots across campus Monday.  Some of the bananas were marked with racist slogans and the letters “AKA,” short for the 100+ year-old African American Sorority, Alpha Kappa Alpha.

This vile display of hate appears to be a response to the election of Taylor Dumpson, a sister of Alpha Kappa, who had just been sworn-in as the university’s first female African American president of the student government that same day.

According to a report by Buzzfeed News:

“Photos of the bananas show that they had racist messages written on them, like ‘Harambe bait,’ which referenced the gorilla that was shot and killed at Cincinnati Zoo last year, and ‘AKA free.’ “

“This is not what I imagined my first letter to you all would be,” Ms. Dumpson said in a statement.  “In my first message to the student body, I would have wanted to talk about accountability, transparency, accessibility, and inclusivity. Now more than ever, we need to make sure that members of our community feel welcomed and above all, safe on this campus.”

Students are shocked, but they aren’t taking this incident lying down.  Hundreds rallied for a campus-wide march today to show unity and demand action.

University President Neil Kerwin, to his credit, moved swiftly to condemn the incident, saying in a statement, “I regret this happened, apologize to everyone offended, and state emphatically that this incident does not reflect what American University truly is. …Our entire university community has been adversely affected by this cowardly, despicable act.”

The University’s Public Safety Director Phillip Morse also announced a $1,000 reward for information about the perpetrators of this heinous act.