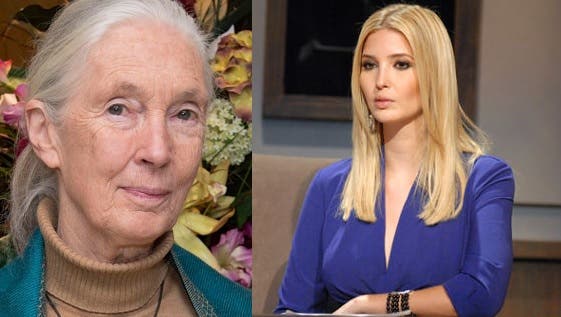 Conservationist and anthropologist Jane Goodall was surprised to learn that Ivanka Trump has quoted her in a new book she has written, “Women Who Work,” and now the legendary naturalist has a message for the Senior White House Counsel.

The message to Ivanka from the 83-year-old founder of the Jane Goodall Institute is: “What you do makes a difference and you have to decide what kind of difference you want to make.”

Goodall’s response after learning she was quoted was to a query by CNNMoney: “I sincerely hope she will take the full import of my words to heart. She is in a position to do much good or terrible harm.”

Goodall then made clear exactly what she meant: “Legislation that was passed by previous governments to protect wildlife such as the Endangered Species Act, create national monuments and other clean air and water legislation have all be jeopardized by this administration.”

“I hope,” she added, “that Ms. Trump will stand with us to value and cherish our natural world and protect this planet for future generations.”

Goodall, who is an honorary U.N. Messenger of Peace has long been a strong advocate for wildlife,  conservation, and environmentalism.

When asked by CNNMoney for a response, a spokesperson for Ivanka didn’t answer directly or make any promises. Instead, she sniffed that Ivanka’s book is not political, as if that means she has no responsibility for what her political dad is doing, or what she does now that she has a government office, security clearance, staff and unprecedented access to the center of American power.

The first daughter’s lame response to Goodall through a messenger: “Ivanka has always believed that no one person or party has a monopoly on good ideas. When she was writing this book, she included quotes from many different thought leaders who’ve inspired Ivanka and helped inform her viewpoints over the years.”

There is no promise to help the environment, wildlife or endangered species. Just a notice that Ivanka used a lot of sources and gave each one credit for their quotes.

When history is chiseled in stone, Goodall will have a place of honor for all of her accomplishments as an author, as a protector of all species, as a fervent environmentalist.

And Ivanka will be remembered for….what? Nepotism. Failing to rein in her out of control father. For standing by while he poisons rivers, fails to provide clean drinking water for children, takes the food out of the mouths of senior citizens, cuts funds for medical research and threatens to start a nuclear war with a third rate dictator?

Culpability with the worst president and most regressive president in contemporary history seems destined to be Ivanka’s legacy despite her up close access to the wheels of power in the White House. She doesn’t get everything she is doing is political now.

What the world needs are more Janes and a lot fewer Donalds, Jared’s and Ivanka’s.