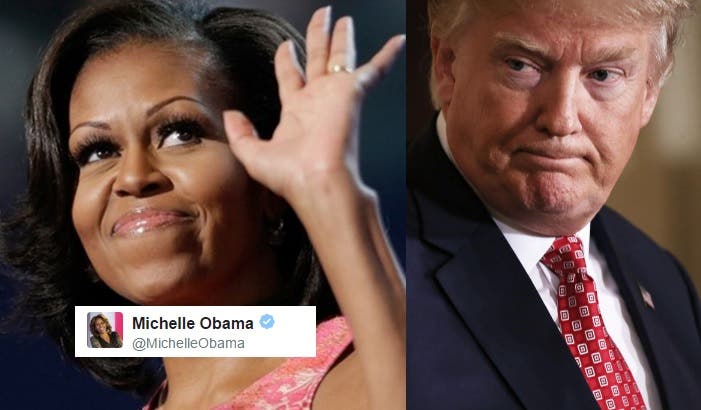 As part of President Trump’s petty crusade of racist vengeance against all things Obama, former First Lady Michelle Obama’s “Let Girls Learn” program will be getting the axe.

The program, which began in 2015, was dedicated to providing educational opportunities for young women in foreign countries. As politically uncontroversial as programs come, Trump’s decision to end the program was met with disappointment from the public and silence from his “feminist” daughter Ivanka.

But Michelle isn’t letting that setback stand in the way of her mission to make empower young women across the world. She subtly responded to our misogynist-in-chief with all the class and grace that we adore her for.

Excited by the potential of the Obama Pres. Center. Barack & I will continue to champion the issues close to our hearts, including girls ed. pic.twitter.com/3VVtNyKHLK

President Obama and Michelle just began unveiling the plans for his Presidential library, but they’re not waiting for it to be built before reaffirming their commitment to helping young people in their home city.

Yesterday, President Obama announced he and Michelle will be donating $2 million to fund summer jobs programs for young people in Chicago.

It is so wonderful to see the Obamas back in the public eye and doing their best to help the American people however they can as private citizens.

The relentless dedication to uplifting people and improving the lives of the American people that characterized the Obama presidency is alive and well, and it stands out in stark contrast to the greed and the selfishness of the Trump family.