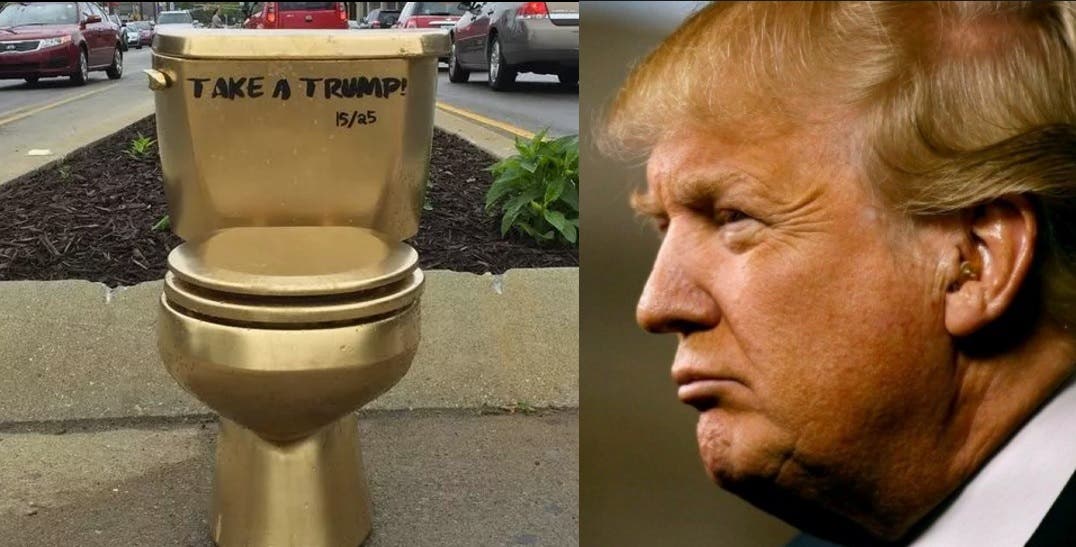 Since the president’s 100th day in office last week, gold toilets marked with the words, “Take a Trump,” have appeared in cities across the U.S. including Los Angeles, Chicago, Denver, Austin, Portland, Las Vegas and Miami.

They are the work of a collective of artists – possibly as many as 100 of them, known as the “Art Finksters.”

An artist who went to school in Indiana told the Indianapolis Star website, IndyStar, that he initiated the idea the day after Trump’s inauguration when he saw coverage of the massive women’s marches all over the country.

He asked to be anonymous, although others have given the name “Art” in interviews.

“Our goal and object is to bring awareness to people,” said the Indiana artist, “to inform them about the current state of affairs. We all are strongly opposed to the current occupation of the White House and have come together to bring change through our work.”

That artist said he reached out to about 100 other artists nationwide, “and almost everybody was on board.”

“Most people just go with the status quo,” he added, “and we’ll play that role of being that bump in the status quo. We’ve brought it upon ourselves to inform the public about what’s really going on.”

He sent each artist who agreed to participate a package with how to decorate the toilets with “Take a Trump,” and pig stencils. He advised that they should be placed in highly visible locations where there is a lot of foot traffic, to get people to take photos and start a conversation.

“It’s not our plan to deface anything,” he added. “We won’t ever do that. That’s not in our agenda.”

“This project is just to make people aware,” “Art” told HuffPo, “to let the people in charge know that what they’re doing is being watched and dissected very carefully.”

In Indianapolis and likely elsewhere, the toilets were quickly removed by public works employees who said it was a hazard that could pose a safety risk.

On the Ball State campus in Muncie, Indiana, Reggie Lyons told IndyStar he saw the toilet with his wife: “It caught my eye and I did a double take. And as I got closer and read it, my wife and I immediately burst into laughter.”

This is the first of a series of stunts the art collective is planning, although the Indiana artist declined to say what else was planned, adding:

“Our future projects will bring more awareness to policies, legislation, foreign policy, etc. this was just the ice breaker.”

What these street artists are doing is part of an emerging movement across the country to react to the abhorrent Trump administration policies that have stunned and shocked many people who until now have been apolitical.

Not since the 1960s has there been such a spontaneous eruption of angry protests against the President and his administration by everyday people – who are not rich, famous or politicians.

Bernie Sanders backers call what he started a revolution, but this could be a sign of an even greater grassroots revolution that will impact Americans, coming elections and the dialogue about what kind of country the majority of people want.