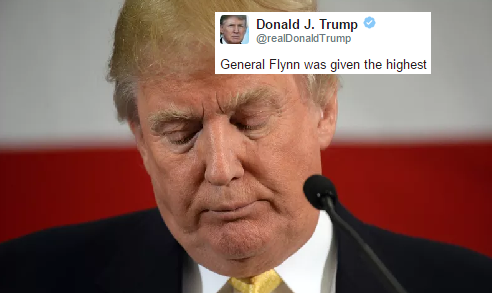 General Flynn was given the highest security clearance by the Obama Administration – but the Fake News seldom likes talking about that.

This Tweet comes after Press Secretary Sean Spicer also tried to deflect blame for the Flynn fiasco onto Obama a few weeks ago.

Trump is also incorrect that it was Obama who gave Flynn security clearance. It’s the responsibility of individual agencies to vet their employees, and with regards to Flynn you can’t really criticize them for it. Flynn was a Lieutenant General of The United States Army, one of the last people you’d expect to be a Russian stooge.

What Trump fails to mention is that it was also Obama who fired Flynn after it became apparent that his management as director of the Defense Intelligence Agency was chaotic and less than professional. It was Trump who then hired Flynn after the fact.

So no, Mr. President, you can’t pin this one on President Obama. This mess is entirely your own doing when your administration didn’t properly vet your choice for National Security Advisor.

Of course, the reason for this Tweet is former acting Attorney General Sally Yates’ testimony that is scheduled for later today. Yates is widely expected to give her account of the many warnings she gave the White House about Flynn’s connections to the Russian government.

Trump is tweeting to try and cover his own ass. It won’t work.

Yates’ testimony is likely to be highly embarrassing for Trump and his administration,s o keep your eyes peeled for our reports on that later today.