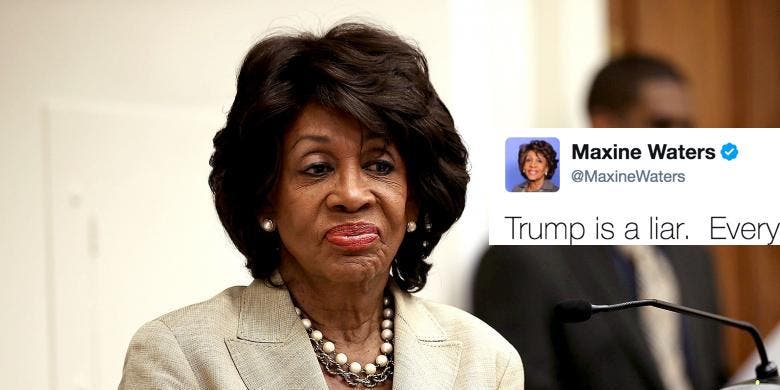 Representative Maxine Waters has quickly emerged as one of the most vocal critics of Trump’s disastrous presidency. Today, the Senate heard testimony from former Attorney General Sally Yates regarding Trump’s Russian connections.

The hearing had scarcely ended before Trump took to Twitter to whine about the news coverage:

The Russia-Trump collusion story is a total hoax, when will this taxpayer funded charade end?

Trump is a liar. Everything that comes out of his mouth is designed to distract. #TrumpRussia story is real. Trump's presidency is the joke

It has already been demonstrated and testified beyond a shadow of a doubt that Trump’s National Security Advisor Michael Flynn had deep, complex ties to Russia. Even if he were the only member of the Trump team coordinating with Russia – which seems highly unlikely – it would still mean Trump is lying. Flynn by himself shows that there is merit to the Trump/Russia story. The only real question is how high up the collusion goes.

The Republicans have demonstrated that they have no interest in a proper investigation. Today’s Senate hearing was a shameful reminder of just the type of hack partisanship they delight in. Rather than focusing on asking about Russia, several senators – including failed presidential candidate Ted Cruz – asked Yates about her refusal to enforce Trump’s unconstitutional Muslim Ban.

Clearly, barring a sudden influx of spinal transplants for the Republican Party, the responsibility falls to Democrats. That means we may not get the full Russian story unless voters turn out en masse and wrest Congress back from the Republicans.

It’s crucial that Trump’s hyper-saturation in the media doesn’t inure us to his dangers and transgressions.  We may be sick of hearing from and about him, but we must maintain focus. The truth about his Russian connections still hasn’t been fully revealed to the public. The American people must keep demanding inquiries until justice is served.

It’s encouraging to know that we have brave women like Maxine Waters leading the fight.