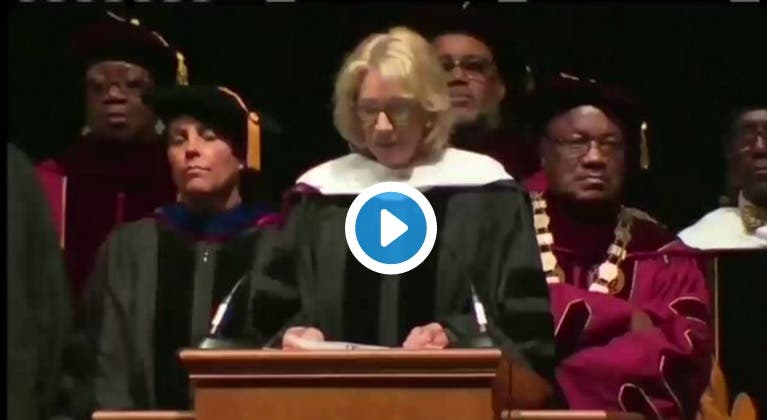 Secretary of Education Betsy DeVos was reminded once again of how enormously unpopular she is while giving the commencement address at the historically black Bethune-Cookman University in Daytona Beach, Florida.

A few days after President Trump threatened to axe federal funding for historically black colleges, DeVos had the nerve to visit one where tens of thousands of students had demanded she be disinvited. She went anyway, and the reaction of the students speaks for itself:

Graduating students turn their back on Betsy Devos when she started her commencement speech, Jackson had to intervene. pic.twitter.com/zwe82gjHgA

They booed her before she gave her speech. They booed her when she started delivering her remarks. And they booed her during her address. There were cheers and applause too, but the boos won the day.

There was so much booing, in fact, that the school administration stopped the ceremony to tell the booers that they would be receiving their diplomas in the mail as punishment – but the crescendo of boos didn’t abate.

DeVos is especially despised by the students at historically black colleges because DeVos, a proponent of dismantling the public school system in favor of charter schools and vouchers, equated the black community’s need to develop its own educational institutions due to white racism as “pioneers of school choice.”

Charter schools and voucher systems originated as part of racist efforts to keep their schools segregated and it is absolutely appalling to hear the Secretary of Education try to hold up historically black colleges as evidence of the success of charter school programs.

DeVos has been booed everywhere she goes – and that’s exactly what she deserves.