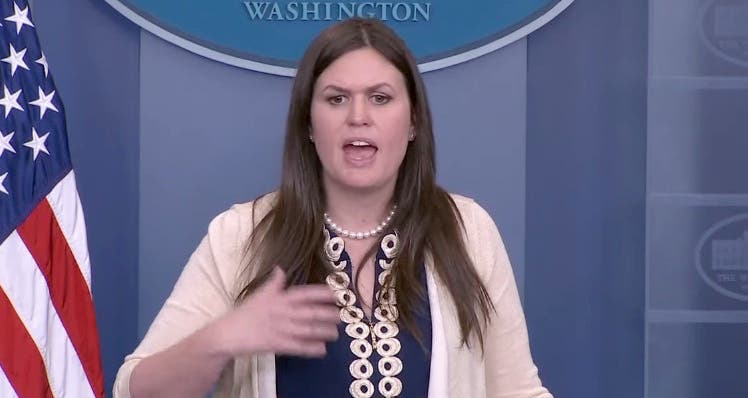 If Sanders is found guilty of violating the Hatch Act, then she can be suspended for not less than 30 days, stripped of her salary for two years or fired, and face a five-year ban from employment by the federal government.

Sarah Huckabee Sanders used her official Twitter account to shill for Trump’s political campaign event in Pennsylvania, which the President used to avoid being roasted at the White House Corespondents Dinner at the end of the first 100 days of his term.

It’s illegal for federal employees to use their offices for any political activity, and pictured Commerce Secretary Wilbur Ross could face a separate complaint about attending the campaign event.

.@SecretaryRoss talks to supporters and signs autographs in PA. Glad to have him helping @POTUS #maga. pic.twitter.com/f7veJZaOOQ

Senior Advisor to the Democratic Coalition Scott Dworkin condemned Sanders’ blatant political activities, saying, “It’s not hard. Don’t use official government accounts to campaign, and don’t use your government post to enrich yourself and your friends.”

Readers might recall that Trump was epically trolled at this very event when someone tossed Russian flags in front of the press cameras. He also failed to fill the hall for his speech on a Saturday night; empty seats are visible in Sanders’ photo.

The Democratic Coalition’s complaint against Sanders is the perfect way for the Trump regime’s failing press operation to continue its worst week.

Rumors are swirling that Press Secretary Sean Spicer might be fired after being literally caught hiding in the bushes, rather than defending the President’s indefensible dismissal of FBI Director James Comey.

SNL just released a promo of Melissa McCarthy getting ready to lampoon Sean Spicer that promises to either provide the comedic send up that ends his career as White House press secretary or will become a fitting obituary if Trump cans him first.

Meanwhile, President Trump is raging that nobody in his Administration will go on TV to lie for him, excepting the laughably discredited Kellyanne Conway.

Now, Sanders will have to brief the press about the serious legal allegations against her, in addition to the Trump Russia investigation that her forceful demands to “move on” from will not end.

See below for the Democratic Coalition’s complaint and press release: