So, three weeks ago, Gizmodo Media Group’s Special Projects Desk launched a security preparedness test directed at Giuliani and 14 other people associated with the Trump Administration. We sent them an email that mimicked an invitation to view a spreadsheet in Google Docs. The emails came from the address security.test@gizmodomedia.com, but the sender name each one displayed was that of someone who might plausibly email the recipient, such as a colleague, friend, or family member.

The link in the document would take them to what looked like a Google sign-in page, asking them to submit their Google credentials. The url of the page included the word “test.” The page was not set up to actually record or retain the text of their passwords, just to register who had attempted to submit login information.

Gizmodo revealed that more than half of the recipients clicked the link. Comey and Gingrich even replied to the e-mails, apparently taking the fake senders’ identities at face value.

Had the recipients read the fine print of the e-mail, they would have seen the line:

“This page was built by Gizmodo Media Group to test your digital security acumen.” 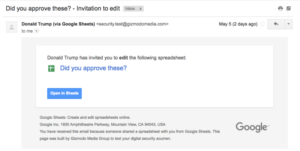 From there, those who clicked the link were met with this disclaimer: 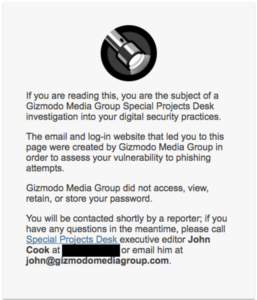 Gizmodo did not collect any personal data from the faux hack.

For the Trump administration – which occupies the White House largely thanks to its attacks on Hillary’s own handling of cyber security issues – to fall victim to such a simple phishing hack is cause for great concern. This is yet another example of Trump’s hypocrisy from the campaign trail to the Oval Office; apparently, cyber attacks are a national security concern only when an election is on the horizon.