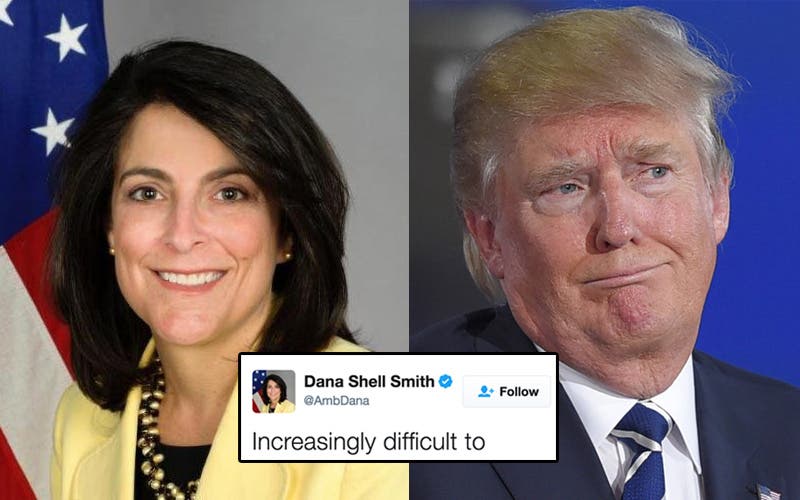 The diplomat has taken a thinly veiled swipe at her boss, President Trump, in response to the firing of FBI Director James Comey yesterday.  Ambassador Smith’s tweet heard ’round the world left no doubt about her exasperation at having to defend the President’s increasingly indefensible schtick to our partners:

Increasingly difficult to wake up overseas to news from home, knowing I will spend today explaining our democracy and institutions.

Trump famously values loyalty above all other qualities in his underlings – even though he has a history of showing very little of that which he demands.  He has zero tolerance for those who publicly criticize him.

Everyone knows about Sally Yates, the Acting Attorney General Trump fired for not implementing his Muslim travel ban because it, you know, broke the law.  But he also fired a lowly assistant to Housing and Urban Development Secretary Dr. Ben Carson recently when he found out he had criticized Trump during the campaign.

Shermichael Singleton, 26, had worked on Carson’s own presidential bid in 2016 before joining the administration. In the closing weeks of the election, Singleton wrote an op-ed critical of Trump in which he blasted the then-nominee’s rhetoric toward black voters as “a coded message from an era in our history that should stay in the past.”

Ambassador Smith’s tweet has gone viral, and it’s only a matter of time before the President sees it. Whether she still has a job after that is anyone’s guess, but history suggests she should start polishing-up her resume.