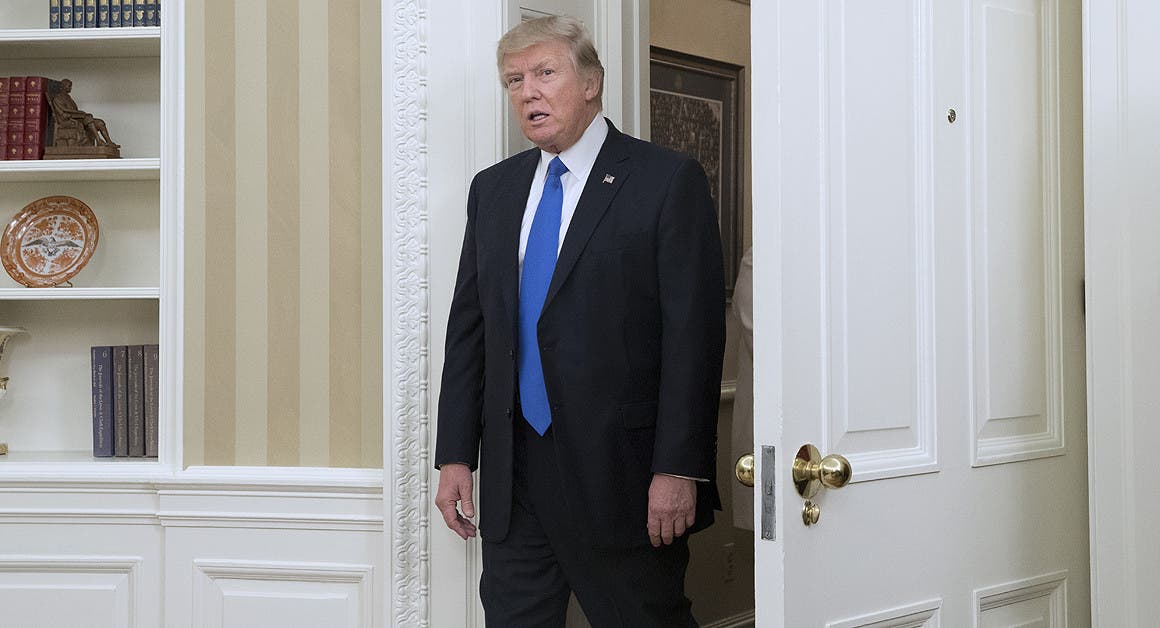 It’s becoming apparent that Trump delights in rubbing the Russian scandal in the faces of the American people. His constant interactions with Putin, and his refusal to take a strong stance against the Russian cyberattacks on the American and French elections screams complicity. His latest move is even more egregious.

Yesterday, Trump allowed TASS – a Russian state-run news agency – into the Oval Office during his meeting with Russian officials. The Washington Post reports that TASS has deep ties to Russian spy rings, and actively cooperates with the SVR, a Russian intelligence agency.

TASS has a long history of participating in Russian intelligence operations going back all the way to the Cold War, so it’s entirely conceivable that their presence in the White House’s inner sanctum was about more than just a simple photo op. While Trump talked and laughed with Foreign Minister Sergey Lavrov and Ambassador Sergey Kislyak, a professional spy would have found it relatively easy to plant listening bugs, especially since they already had AV equipment with them.

The Tass news agency was the only media Trump allowed in the room for the strange meeting. There was no known agenda, and it’s been revealed that Trump agreed to it at Vladimir Putin’s urging.  As soon as the photographs were released, a writer at Gizmodo remarked that it was strange seeing TASS as the agency taking the photos:

Photos of Trump's meeting with Lavrov and Kislyak just hit the Getty wire and they're all credited to Russian news agency TASS pic.twitter.com/qE9lWB6KuS

Two former Obama Administration officials – including a former Deputy Director of the CIA – explained how dangerous and unusual it was for anyone to bring electronic equipment into the Oval Office, let alone a pair of Russian spies for TASS.

TASS was previously caught spying for Russia. FBI officials bugged an SVR safe house that was being used by spies to write questions for TASS reporters to ask at financial events in New York City.

One of the Russian spies in the ring was undercover as a banker at the state-owned Vnesheconombank and was convicted. The bank even paid for the legal defense of the spies and paid off the spies’ disgruntled landlord. Two other associates were indicted without diplomatic immunity and fled the United States.

If the name of that bank sounds familiar, that’s because it’s the very same Russian bank whose CEO held a secret meeting with Trump’s son-in-law Jared Kushner. When the meeting was revealed, Democrats called for a removal of Kushner’s security clearance, as well as a criminal investigation.

In an almost farcical coup-de-grâce to the entire affair, Vladimir Putin personally served as the Chairman of Vnesheconombank’s Supervisory Board while simultaneously serving as Prime Minister of Russia, according to a 2008 report in the New York Times.

It’s unconscionable for Republicans to rest on their laurels while Donald Trump invites Russian spies into not only the White House, but the Oval Office itself.

How much longer will it take for America’s spineless Republicans in Congress to remember that they serve the people and not the President? It’s time they filed Articles of Impeachment against a man who is not only degrading our international reputation, but compromising our national security.

It’s going to take more Americans at town halls across the country, like this one in New Jersey, raising their voices and speaking in unison: “Stop being a politician and start being an American.”