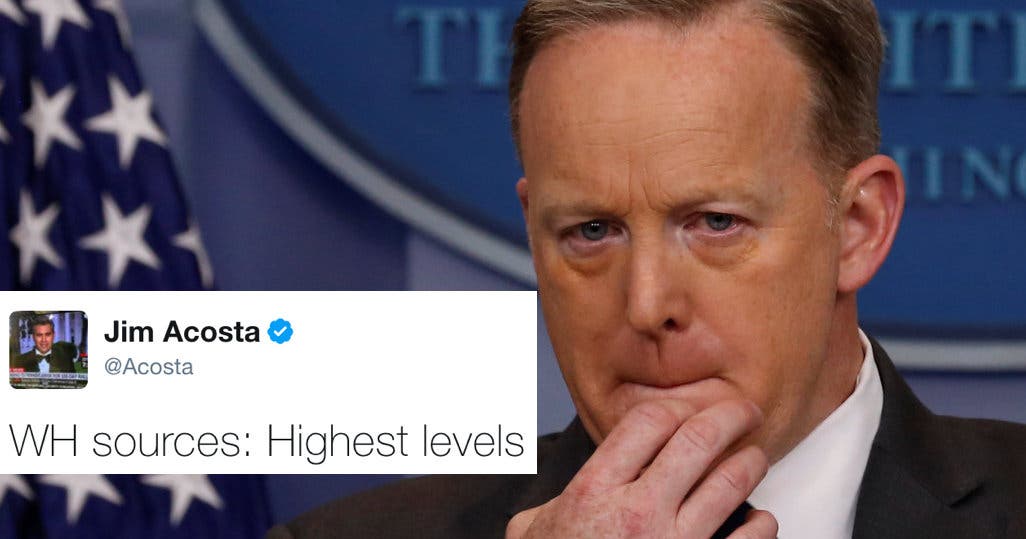 Melissa McCarthy is expected to do another of her hilarious impressions of White House Press Secretary Sean Spicer tomorrow on Saturday Night Live, but some think it may be one of her last opportunities.

That is because Spicer is in hot water with Trump and others in the White House, according to multiple reports, and his continued tenure as the president’s main mouthpiece is in serious doubt.

In the past, Trump has insisted he continues to have confidence in Spicer – but what happened this week put even more dents in the embattled press secretary’s image.

This time, even Trump is said to be unhappy with Spicer, and at least two senior White House officials have been “sharply critical” of him, according to CNN Money.

The immediate issue relates to how Spicer handled the news about the firing of FBI Director James Comey on Tuesday. A senior White House official is quoted as saying it was an “embarrassment,” and another said the president himself thought it was “poorly handled.”

Spicer has been off since Wednesday serving at the Pentagon as part of his Naval Reserve duties, an absence planned in advance which the president reportedly approved.

While Spicer was away, the daily White House briefings were handled by Sarah Huckabee Sanders. This is seen as not just a backup stepping in, but also as an audition to see how former Arkansas Governor Michael Huckabee’s daughter handles herself with the increasingly testy press corps.

Trump was apparently watching on television Tuesday as Spicer was pushed into an impromptu news conference outside the White House after the Comey bombshell dropped. Spicer was seen hiding behind some bushes and when he emerged he refused to answer questions until all of the TV camera lights were turned off and reporters agreed not to film the briefing.

Things went downhill from there. Spicer was asked if the president had spoken to Deputy Attorney General Rod Rosenstein about the review of Comey prior to his firing.

“Already beset by critics who say he has lost his credibility,” CNN Money reported, “Spicer may now be losing his authority. His charge is to tell the media, and the public, what the president is thinking. And yet it is becoming increasingly clear that he is either not able to fulfill that task or choosing not to.”

Sanders, meanwhile, has been getting high marks both from the White House and most reporters for her performance. She still isn’t answering the questions but she seems to pull it off with more grace and aplomb than Spicer, who recently looks like he is under great stress.

While Spicer is away, he continues to be mocked on social media and is the subject of numerous memes and internet jokes. Many of the jokes play off Spicer hiding behind the bushes.

“Several Twitter users compared Spicer to the animated character Homer Simpson,” reported Newsweek, “who in an episode famously backed into a hedge to hide himself after his neighbors said they didn’t want to hang out with him.”

Spicer hiding behind a hedge is almost certainly going to be part of McCarthy’s comedy performance tomorrow on SNL, adding to the sense he has become a running gag.

While Sanders is doing better at the moment, it will be difficult for any press secretary to work for Trump because he frequently changes his mind, does not always communicate even to his full staff in advance of making important decisions and is known to be fixated on his own image as shown on TV.

As a very active President with lots of things happening, it is not possible for my surrogates to stand at podium with perfect accuracy!….

…Maybe the best thing to do would be to cancel all future "press briefings" and hand out written responses for the sake of accuracy???

Trump’s impulsive actions appear to be a deadly problem for Spicer’s career, just as it is a problem for Americans, who can’t predict what the president will do next. That is not a good thing unless you are a late night comedian.