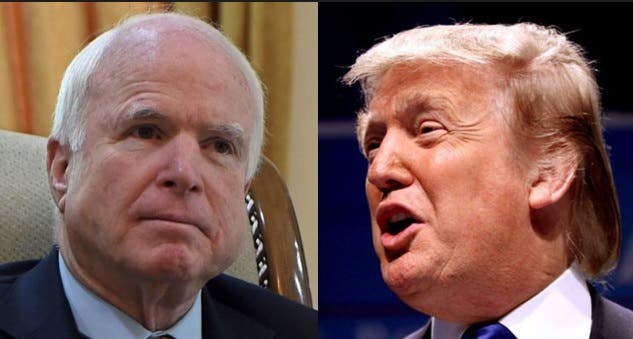 Senator John McCain (R-AZ), so-called “maverick,” has been one of the loudest voices speaking out against President Trump and his potentially treasonous ties to Russia – but when push comes to shove, he never has the stones to defend the principles he ostensibly holds dear and stand up to the rest of his treason-enabling party.

Once the news broke that the President had leaked top-secret information to Russian ambassador Sergey Kislyak, reporters immediately sought out foreign-policy hawk McCain – who had a deeply disappointing response to the widening scandal, via AP Congressional correspondent Erica Werner:

McCain just saw WP: "We certainly don't want any president to leak classified information but the president does have the right to do that."

While Trump may technically have the “right” to do so, McCain of all people should understand and be outraged at the significance of Trump’s act.

The President of the United States just sabotaged our relationship with a close ally and put in mortal danger an intelligence asset vital to the American-led coalition campaign against Daesh (ISIS/ISIL) just so that he can offer up something of value to his masters in Moscow.

The president technically has the right to unleash a nuclear holocaust on whatever he feels like but that doesn’t mean even entertaining the idea of doing so is acceptable. Never mind the fact that Republicans have been conducting a witch-hunt into former Secretary of State Hillary Clinton for the past few years over the mishandling of low-classification information while Trump is handing out our deepest secrets willy-nilly.

It’s absolutely despicable to see McCain, who loves to tout his patriotism, roll over and dutifully choose his party over the good of our nation once again.