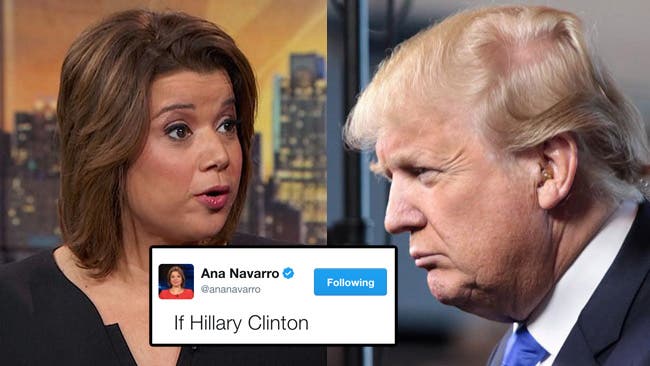 Ana Navarro is done!  The lifelong Republican has had it with her own party, and she’s not keeping quiet about it any longer.

The CNN political analyst took to Twitter yesterday to carpet bomb the GOP with a pair of piercing, dismantling tweets calling them out on their silence and complacency in the spiraling Trump-Russia scandal.

If Hillary Clinton leaked classified info to a Russian spook/diplomat, Republicans would rightly be drafting Articles of Impeachment N-O-W.

Pic of missing spine of most GOP elected leaders should be on side of milk cartons. Last seen Oct 2016. Abducted by a man wearing red tie.

Navarro hasn’t been shy about ruffling Republican feathers.  She was an early ‘Never Trumper,’ and went viral last year in the middle of the ‘Pu–y Gate’ scandal when she scolded a Republican talking head for standing by candidate Trump after that embarrassing episode in American political history.

Oh, how innocent and inconsequential those comments seem now by comparison.