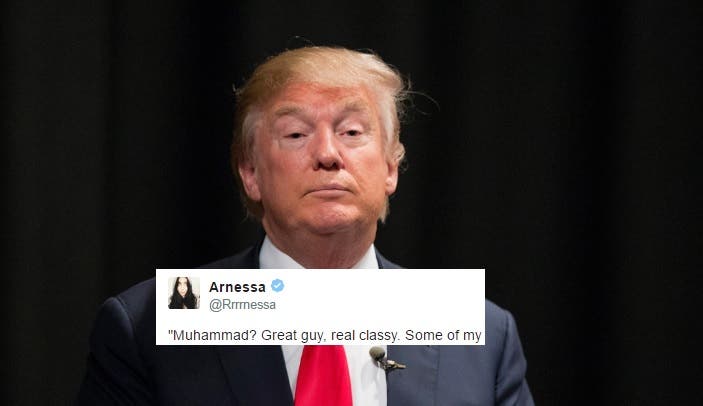 The Agence France-Presse has just announced that President Donald Trump, notorious Islamophobe and ignoramus, will be giving a speech on Islam during his upcoming trip to Saudi Arabia, home of Islam’s holy city of Mecca and the world’s largest sponsor of terrorism.

#BREAKING Trump to give speech on Islam in Saudi Arabia: White House

The news was met with trepidation from the public, to say the least. Trump has tried to ban Muslims from entering the United States not once but twice; insists on using the Islamophobic term “radical Islamic terrorism” instead of simply “extremists” or “militants,” and has dabbled in the rhetoric of white supremacists who point to Muslim immigrants and refugees as a threat to “western” (read: “white”) civilization.

So there is a serious reason to be concerned with the notoriously insensitive and ignorant Trump giving a speech on a religion he’s spent the past year and a half disparaging.

Here’s a collection of the best responses to the news.

Trump speech on Islam in Saudi Arabia nxt wk will surely end with the customary "tossing of shoe" pic.twitter.com/oNIf7BLSDk

News breaking that Trump is going to give a speech about Islam during his visit to Saudi Arabia. Don't forget. He uttered this nonsense. pic.twitter.com/7BlFGDfB8N

"My kids loved Aladdin, a tremendous film. Arab girls are hot. And my hotels in the Middle East are doing well. I love Islam. Just love it."

Of our elaborate plans. The end,
Of everything that stands. The end,
No safety or surprise, the end,
I'll never look into your eyes
Again

Jesus got along very well with Muslims. He allowed them to wear their turbans and even met with their leader Buddha. I love their pork rolls pic.twitter.com/FPb8LqPsrg

Gorka is busy writing Trump's speech on Islam for the Saudi Arabia trip at this very minute… pic.twitter.com/F3bI7cJuEa